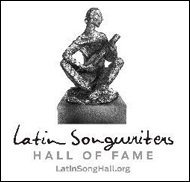 MIAMI, FL (CelebrityAccess Mediawire) This Saturday, October 18th, a celebration took place during the second annual induction gala of the Latin Songwriters Hall of Fame LA MUSA AWARDS® honoring some of the greatest Latin music-makers of all time. From the posthumous homage to Argentinean composer Carlos Gardel by singer Diego Torres who performed Gardel's classic tune, "El Día Que Me Quieras" (The Day You Love Me), to the final performance of the evening when singers Jon Secada and Ednita Nazario came together on stage to perform inductee Gloria Estefan's epic anthem of hope and transcendence "Coming out of the Light".

The evening was hosted by the actress, model and activist Eglantina Zingg, who returned to LA MUSA AWARD ® during an event that brought together the biggest stars of Latin music in a celebration honoring their music and its makers. (a complete list of the honorees at the bottom).

R&B singer Miguel received the La Musa Victory Award and performed a medley which included the worldwide hit "Adorn" and the theme "Destined to Die." To honor Lolita de la Colina, one of the composers inducted this year in the Latin Songwriters Hall of Fame, Rafael Negrete performed a medley with two of the biggest hits of the Mexican composer, "Sin Caballero No Hay Dama", "Se Me Olvido Que Te Olvide."

A tribute to Rafael Perez Botija was performed by David Bisbal, who sang one of Botija's classics, "Desesperado.". Leila Cobo, entertainment journalist who is executive director of Latin content and programming for Billboard was presented the La Musa Conquistador Award to Jencarlos Canela who performed a medley with his biggest hits including "Amor Quédate" and "Tu Sombra".

Argentinean composer, musician and music producer, winner of several Oscars, Gustavo Santaolalla performed one of his classics and was responsible for introducing the Ralph S. Peer Publishers Award (Premio Editores Ralph S. Peer) to renowned music industry executive, Zach Horowitz. The Icon Award (Premio Icono) was presented to Spanish singer, songwriter and producer, Alejandro Sanz, one of the most influential artists of the past two decades, who performed his worldwide hit "No Me Compares."


The 2015 list of the 24 Nominees will be announced on Jan 28th in two categories (performing and non-performing) and the voting begins immediately after the press conference. The final 6 Inductees will be decided by its members.