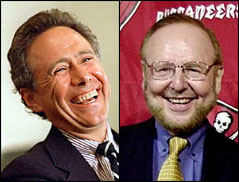 LONDON (CelebrityAccess MediaWire) — American entertainment magnates Philip Anschutz and Malcolm Glazer have been caught in the middle of a controversial British government fight to bring a 24-hour “super-casino” to the UK, and could be pitched against each other in the battle.

The London Evening Standard reported that the British government is set to employ a loophole in the national Gambling Act to increase the number of 24-hour betting complexes. Before the recent election, however, the Labour party was forced to scale back plans for dozens of casinos to only one super-casino after a massive public revolt.

Blackpool will be the first venue for the new breed of million-pound jackpot resorts, but the Government has argued that at least one other casino needs to be built in order to meet its “regulatory” requirement to assess the impact of a gambling revolution. Department for Culture, Media and Sport officials say a proper test can only be carried out if there are two casinos – one at a seaside resort and one in a city.

This new stipulation has led to competition between London and Manchester to be the home of another Las Vegas-style betting complex. Anschutz and AEG are planning a massive casino at the heart of their Millenium Dome leisure complex. Malcolm Glazer, new owner of Manchester United, has pushed plans for a casino complex at United’s Old Trafford location. Glazer could run into trouble because he owns the Tampa Bay Buccaneers football team in the United States. The NFL prohibits owners from having a stake in casinos to avoid conflict of interest betting problems.

The Evening Standard reported that Anschutz is planning to turn the Millenium Dome into an “entertainment city.” Insiders say a super-casino is essential for the Dome development. AEG chief executive David Campbell told the paper that the super-casino was an important part of the project but “not the linchpin.”

A final decision on where the first super-casino will be build will not be made before 2007. –by CelebrityAccess Staff Writers