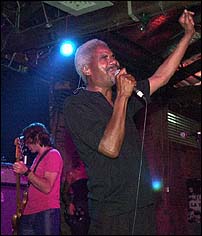 (CelebrityAccess News Service) — Antone’s: Home of the Blues, a documentary about Austin’s legendary Antone’s Blues Club (and the man behind it – Clifford Antone) will gets its world premiere screening on March 12 at 6:00 PM at the Paramount Theater in Austin, TX as part of the upcoming South By Southwest Film Festival. SilverStar Entertainmnet will also screen the documentary on March 16 at 9:30 PM at the Alamo Drafthouse and on March 19 at 5:15 PM at the Austin Convention Center during the South By Southwest Music Conference.

The new documentary film traces the life of Clifford Antone from his beginnings in Port Arthur, TX through the club’s 1975 start-up, to the present location of what has become the legendary Austin blues venue that stills bears his name. From its humble beginnings to its current place as one of the premier showcases in the world for blues – and other roots music – Antone’s became a beacon for blues legends and newcomers alike, who found in its friendly confines a place to perform their music in front of an appreciative audience and in an environment that nurtured both the music and the artist alike. Starting with its opening night guest of legendary zydeco king Clifton Chenier, Antone’s has hosted a literal “who’s who” of the blues world, with such artists as Muddy Waters, B.B. King, Fats Domino, Bobby “Blue” Bland, Jimmy Reed, Buddy Guy, Eddie Taylor, Sunnyland Slim, Hubert Sumlin, Luther Tucker, Jimmie Rogers and Big Walter Horton gracing the stage through the years.

In addition to the legends, Antone’s became a learning school for such Austin locals as Stevie Ray Vaughn, The Fabulous Thunderbirds, Charlie and Will Sexton and Angela Strehli, who, drawn by the majesty and power of the blues, embraced its soul and took the music to new heights with their own interpretations of the classic sound.

Laced throughout Antone’s: Home of the Blues are rare interviews, performance footage and home movies. Included are interviews with many of the local and national people who’ve helped nurture and support Antone’s throughout its history, as well as testimonials from a gamut of special guests ranging from B.B. King, Willie Nelson, Billy Gibbons, Buddy Guy, Joe Ely, Marcia Ball and Kim Wilson to director Robert Rodriguez.

Antone’s: Home of the Blues was directed by Dan Karlok, an award-winning cinematographer and director, who has won two Emmy Awards for directing and producing the Asleep at the Wheel long form documentary, “Ride With Bob.” He was also nominated for a Grammy Award for the same project. In addition, his work has been honored at the MCA-1 Awards, the New York Film Festival, the Worldfest Film Festival and film festivals in Chicago, Charleston and Houston. He has also directed an episode of the NBC-TV hit series, “Law and Order.” His most recent shoot is the feature film, “The Last Request,” starring Danny Aiello.

Executive producer of the film is Lucky Tomblin, founder and owner of SilverStar Entertainment, who is a bandleader and songwriter. He founded the Fire Station recording and film studio in San Marcos, TX, where he recorded such artists as Stevie Ray Vaughn and the Texas Tornados. In addition, he helped start the sound technology recording program at Texas State University in San Marcos.

E. Colleen Saro is producer of the documentary, her first time in that capacity, but who has extensive experience in the film industry as a set decorator, on-set dresser and in the prop departments for such film and television productions as “The West Wing,” “The Replacement Killers,” “Arli$$,” “Hollywood Homicide” and “Hope Floats.” –Bob Grossweiner and Jane Cohen