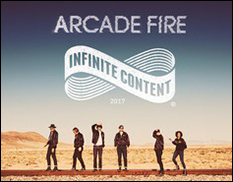 Produced by Live Nation, "Infinite Content" will see the band perform at arenas and other major venues around the US and Canada throughout the fall before wrapping up on Nov 3rd when they perform at the Air Canada Centre in Toronto.

The band's outing will support their fifth studio album, which is due to go onsale on July 28th, and is Arcade Fire's first release under its new partnership with the global media and e-commerce platform Everything Now in synergy with the Sony Corporation.