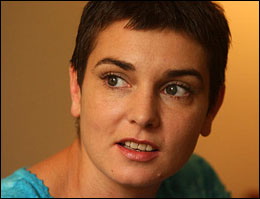 Sinead O'Connor has decided to retire from the music business effective July 2003 in order to pursue a different career. On her website, she posts, "The last recordings I will make will be (believe it or not) a track for Dolly Parton's upcoming tribute album and a track for Sharon Shannon's forthcoming album. These will be recorded in May."

"In July I will be releasing a DVD of a live show and documentary featuring tracks from way back along with tracks from Sean Nos Nua. The DVD will be entitled "Goodnight, thankyou. You've been a lovely audience."

"And so ye have. I wish here to thank everyone who has been a fan and or supporter of mine over the last twenty-two years in the music business (first record at 14, deal at 17. Half o first album wrote when 15). As well as all the people whom I have had the honour of working with. Not least the great Dolly Parton herself!

Thanks to all of ye for a great time and a great education."

"I would request that as of July, since I seek no longer to be a "famous" person, and instead I wish to live a "normal" life, could people please afford me my privacy. By which I mean I would like not to have exploitation of my self or my name or anyone connected with me by newspapers."

"I also mean that (with love) I want to be like any other person in the street and not have people say there is Sinead O'Connor. As I am a very shy person, believe it or not. So I ask with love, that I be left in peace and privacy by people who love my records too. And I hope it doesn’t sound rude. It ain't meant rude. I am glad that ye are helped by my songs. So help me too, by giving me what is best for me, a private life."

"My advise to anyone who ever admires a so called "celebrity" if u see them in the street, don't even look at them. If u love them, then the lovingest thing u can do to show them so is leave them alone and don't stare at them! Or bang on restaurant windows when they in there. Or make them get their picture taken, or write their names on bits of paper. That's pieces of them. And one day they wake up with nothing left of themselves to give."

"PS This web site will exists until September. Then bye bye."

PASADENA, Calif. (AP) — David Lee Roth got an unwanted visitor when a man being chased by police climbed over a fence and tried to hide in the rock star's yard.

The former Van Halen frontman's publicist said Roth used a shotgun to hold the man at bay until police arrived, but police spokeswoman Janet Pope could not confirm that Wednesday.

"He was laying on the grass when our officers arrived," Pope said of the man arrested.

She said Charles Cooley, 47, was being pursued by officers responding to complaints of someone throwing rocks at windows around 2 a.m. Saturday. He was arrested for investigation of amphetamine possession.

Roth publicist Lathum Nelson said the singer stood on his second-floor balcony and pointed a shotgun on the intruder until officers arrived.

"Dave cornered the guy with his shotgun. … When the cops got there, he put the gun away," Nelson said Wednesday.

NEW YORK (AP) — Luther Vandross contracted pneumonia after suffering a stroke and had to undergo a tracheotomy to help him breathe, but the procedure didn't damage his vocal chords, his representatives said Monday.

The Grammy-winning singer remains in critical but stable condition, and spokeswoman Lois Najarian told The Associated Press: "We expected him to be out of intensive care right now."

His business manager, Carmen Romano, released a statement Monday confirming that Vandross suffered pneumonia during his hospitalization and had to have a tracheotomy, a procedure in which a hole is made in the throat and a tube is inserted to assist breathing.

"The tracheotomy was performed in a manner in which his vocal chords were not affected or damaged," Romano said.

Najarian said it was unclear whether the tube had been removed.

Vandross, 52, had a stroke April 16 at his Manhattan home; he was alone for hours before being discovered, Najarian said. He's been hospitalized at Weill-Cornell Medical College.

Romano also said Vandross is minimally responsive neurologically "and we're waiting for him to regain full consciousness. I am told that this may take some time."

Najarian said Vandross hadn't opened his eyes or spoken since his stroke and "he's had to fight off quite a few infections."

"There was a real feeling that he would have regained consciousness by now," she said.

Najarian said doctors haven't been able to determine whether Vandross suffered any permanent neurological damage from the stroke, such as paralysis.

As for his prognosis, she said: "I think it's a day-to-day analysis of the situation; no one really knows what to expect."

Vandross has sold more than 20 million albums in the United States alone, and his hits include the love ballads "Here and Now" and "A House Is Not a Home."

His new album, "Dance With My Father," is scheduled for release in June.