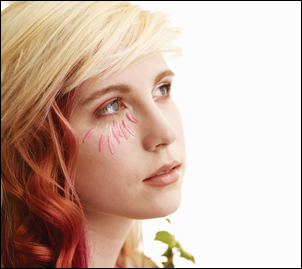 Gillis turned 21 two weeks ago, and has just released her second album, ‘Forget

Me Not’, to applause from the dean of American rock writers, Dave Marsh, and

She lives with her parents and two younger sisters in Vineland, a small town in

winning acoustic guitarist — who also produced both her albums, and an EP she

released when she was 17.

The 2009 winner of the Canadian Folk Music Award for young artists, Ariana's

music is more pop than folk, but seems to defy categorization anyway. Her

performances are high energy, and she's confident, funny and likeable on stage.
She's well worth discovering.

How do you compare songwriting to performing in your daily life?

The two are vastly different. Songwriting is a personal experience for me in

which I have to be completely isolated from the rest of the world…otherwise, I

can’t enter my world. Performing is all about the audience and the music. It

requires a different type of energy.

You've always worked with your father in the band? Is this cool, or do you care

Yes, my dad has always been in the band. And I love working with him because of

what he contributes to the whole picture. I really don’t care about what's cool

and what isn’t. Anyone, anywhere can make anything cool, new and exciting as

long as they have the right tools to make it work. My dad is insanely creative,

You're 21, and you don't write love songs. Think you ever will?

I think, to an extent, I do write love songs. I just tend to intertwine them

with a story so that they aren’t so obvious. In actuality, the very essence of

songwriting is emotion, and love is one of the most powerful feelings that we as

humans share and express everyday. My song, “John and the Monster” is entirely

about love. When I write songs, I always strive to say things in an original

way. I definitely credit my dad for that; he's always taught me to talk about

subjects in a different light.

Can you describe how you write songs?

Describing my songwriting process is actually one of the most difficult

questions that I get asked by people. And I often find that most people are

disappointed with my answer. Sometimes I think they are looking for a step-by-

try to write songs. I never sit down with my guitar and say; “I’m going to

write a song now.” It just doesn’t work like that. Inspiration chooses when it

wants to hit me. I feel I am merely a vessel that it can travel through to

create something that I hope is new and beautiful and exciting.

… and the performers who have influenced you?

What's the best thing that's happened to you so far?

Being on Dave Marsh’s XM Sirius Radio show, “Kick out the Jams” was definitely a

The worst thing was getting double pneumonia in my last year of high school. I

weakened me so much. But, I was determined to get my voice back and so I pushed

myself extremely hard – further than I thought was possible.

If your dreams come true, where will you be musically when you turn 25?

inspire other artists to create. I also want to always continue to improve as a

musician, songwriter and as a performer. I hope that when I am 25, I can look

back and see how much I’ve grown as an artist.

You made your first EP when you were 17. What did you learn from that

Looking back, I now realize that the most valuable piece of information that I

took from that experience was that I still have a lot to learn. As the years

progress, I find myself feeling like I know less and less, but in a way, I

really like it… What I have discovered, is that music is everything to me.

years has paid off in different ways than I expected it too. I’ve become more

articulate, I know myself better, and I have become confident in my creativity

GarageBand. They are just sitting on my computer waiting to see the light of

What books are you reading now?

What movie has impressed you so far this year?

So far, the movie “The Help” has impressed me the most. I went into the theatre

not really knowing what to expect. What I witnessed was one of the most

incredible stories I have seen in a long, long time. The movie was so well

crafted. It played on every human emotion and the story was brilliantly

What makes you laugh?

What makes you angry?

Touring the United States. Finding the next people to help build my career. And

playing, singing, and writing as well as I possibly can.