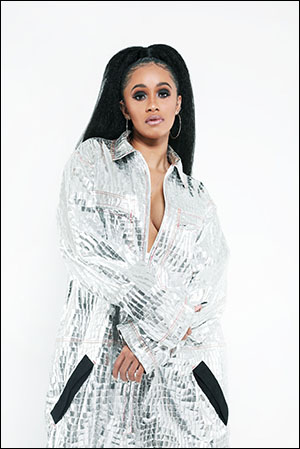 (CelebrityAccess) – KSR/Atlantic recording artist Cardi B has made history as her breakthrough hit single, “Bodak Yellow (Money Moves),” ascends to #1 on Billboard’s “Hot 100.” Recently certified RIAA platinum for sales equivalents in excess of 1 million, “Bodak Yellow” is the highest charting single by any female rapper this year. Along with its current status as the #1 single in the country, “Bodak Yellow” is standing tall at #1 on Billboard’s “Hot R&B/Hip-Hop Songs” and “Hot Rap Songs” charts, the latter for six consecutive weeks and counting, as well as #1 at Rhythm radio. “Bodak Yellow” is available now at all digital music retailers and streaming services.

With more than 188 million total streams thus far, “Bodak Yellow (Money Moves)” is also proving a historic streaming sensation, pulling an impressive 40 million streams in just one week alone, to reach #1 on Billboard’s “Streaming Songs” tally. The “Bodak Yellow” companion visual is equally popular, now with over 170 million videos via YouTube alone. Directed by Picture Perfect, the video “perfectly captures Cardi's status as she reels in the success that accompanies her moves as of late,” wrote HotNewHipHop, “cementing her ascent as a formidable force in hip-hop's current landscape.”

Named “the rap anthem of summer 2017” by the New York Times, “Bodak Yellow” has received critical applause to match its record-breaking popularity. Vulture affirmed Cardi B as “Undisputed Artist of the Summer,” adding “Bodak Yellow” is “the kind of hit typically designed to work for men like Drake, or New York rap guys like A$AP Rocky who’ve closed regional gaps with their Southern influence.” Complex decreed, “Cardi B is Cardi B 24/7, 365, this is why she resonates with people, and that same energy comes out in her music…’Bodak Yellow’ is a great, extraordinarily catchy record. The hook, the beat, her lyrics: it all works. Cardi sounds so sure of herself, it's difficult not to believe and rap along with every word.” Perhaps Stereogum summed it up best: “Bodak Yellow” is “a big, loud, brash, noisy song, and it’s perfect.”

Cardi B – who can also be heard on the recently released new single from G-Eazy, “No Limit (Ft. A$AP Rocky and Cardi B)” – has proven 2017’s greatest hip hop phenomenon, evidenced by the stunning set of nominations she has received for this year’s BET Hip Hop Awards. The NYC-based rapper was honored with a remarkable nine total nods, tied only with Kendrick Lamar for 2017’s most nominations. Cardi B received nominations including “Best New Hip Hop Artist,” “Hot Ticket Performer,” “MVP of the Year,” “Best Mixtape” (for “GANGSTA BITCH MUSIC, VOL. 2”), “Made-You-Look Award,” and “Hustler of the Year,” with “Bodak Yellow” named in the “Best Hip Hop Video,” “Single of the Year,” and “Impact Track” categories. The BET Hip Hop Awards will be presented live on Tuesday, October 10th, exclusively on BET (check local listings).

Signed to Atlantic Records in Fall 2016, Cardi B has followed June’s release of “Bodak Yellow” with a seemingly unstoppable series of appearances and live events including memorable performances of “Bodak Yellow” during the MTV Video Music Awards pre-show ceremonies and on the nationally syndicated Wendy Williams Show, and a cover-starring feature in The FADER’s best-selling “Summer Music Issue.” As if that weren’t enough, Cardi B received two top BET Awards nominations (for “Best New Artist” and “Best Female Hip Hop Artist”) and was among the highest profile celebrities seen at the recent New York Fashion Week, including visits to Rihanna’s Third Diamond Ball, a performance at the esteemed Alexander Wang’s WangFest party and Pat McGrath’s “Mothership” Vogue Ball.

2018 begins with a bang as Cardi B becomes the third act – and the first rapper – to place her first three Billboard Hot 100 entries in the chart's top 10 simultaneously, joining only The Beatles and Ashanti in achieving the feat.