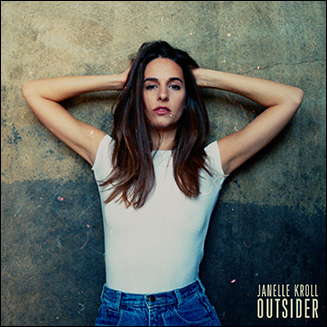 (CelebrityAccess) – Alternative pop singer/songwriter Janelle Kroll has teamed up with songwriter/musician/producer Penguin Prison for "24 hrs," her new single currently out via indie label Lokal Legend. The song was first unveiled exclusively on Earmilk, which described the track as "inviting," "impressive" and "as a whole passionate," and is now currently spinning on Spotify's New Music Friday playlist. "24 hrs" is the latest release off Janelle's forthcoming debut EP Outsider, due out September 30. The 5-song collection also features the lead single "FVR," which premiered first on Harper's Bazaar and is still getting play on several official Spotify playlists.

Janelle co-wrote "24 hrs" with Penguin Prison and Andy Seltzer, both of whom also handled production and mixing duties in studio. When asked what inspired the track, the Chicago-born, NYC-based artist explains, "'24 hrs' takes place on a night that pushes on until sunrise in a city with no horizon. It's an ode to predictable parties in unfamiliar places with strangers, and an expression of detachment felt within the anonymity of the night and of the city. You might interact with someone who appears to be an entirely different person the next day, who not only won't relate to you but can't remember you.

"But more importantly, it's an intervention for those whose environment has seemingly shaped them irreversibly and a plea for authenticity. That's not to say the city, in my case New York City, isn't a place for belonging or that the anonymity isn't beautiful. After all, the push and pull of belonging and longing is the magnet that keeps me here. At times I prefer to quietly observe on the outside, swaying to the beat, taking swigs of water while drinks spill on my white sneakers as I try to make myself invisible. If I jumped in, the night would swallow me whole."

Outsider is further proof of the Janelle's irrefutable gift to capture a spectrum of emotions: powerful and delicate, confident and vulnerable, beautiful and sexy, raw and sultry, earthly and ethereal. Everything springs from a singular style that veers left from indie music's typical posturing. Janelle coyly dubs her sound "dependent music" adding, "I sing about emotional dependencies."

Even before an official release of her own, Janelle built an impressive resume, lending her inimitable vocal talents to several dance tracks such as Dennis Ferrer's "Mind Ur Step," Autograf's "Metaphysical," and Moon Boots' "Utopia" and in 2014, Janelle went on tour with Big Data as lead vocalist. With the February 2015 release of "Sunny Days," Janelle formally introduced her soulful pop, bright harmonies and nocturnal R&B sound to the world. "Sunny Days" first debuted on Bullett Media and was widely praised on several highly regarded sites. Additionally, Spotify chose the track for its coveted New Music Playlist and it went Top 10 on both the hub's U.S. Viral Chart and Global Viral Chart. Amidst the flurry of the release, Janelle was invited to play Lollapalooza 2015. "Sunny Days" has over 1 million spins on Spotify.