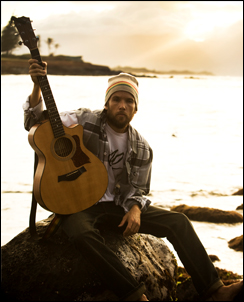 SEATTLE (AP) — Born in Bermuda and raised in the Caribbean, Mishka is a traveler and a sailor at heart. A free spirit, whose lyrics melodies and grooves, are reflections of the roots and culture in which he grew, Mishka's music is Caribbean at the core, and yet it's an eclectic sound that contains many elements and genres. From bass heavy roots reggae, to mellow acoustic ballads, songs of love, songs of social justice and consciousness, you have to hear for yourself and experience the music.


Mishka's journey has taken him full circle, from an independent singer songwriter, then signed to big record labels like Creation and Sony, through the bright lights of Hollywood working with Matthew McConaughey and his jk livin label and finally right back home, where he is at his best, in the Islands, creating his own brand of music, in total artistic control of his songs and his life. Having just come off a summer long tour of North America, with a stop in Japan he is about to head to St Croix in the Virgin Islands, to finish recording songs for his upcoming album to be released this fall.


Mishka has released four Albums to date including the eponymous Mishka in 1999, One Tree in 2005, Above the Bones in 2009, and Talk About in 2010 all of which have received critical acclaim around the world. In 2009 Mishka released a special digital only collection of acoustic songs entitled Guy With a Guitar. This led to iTunes naming the release the Best Singer Songwriter Collection of the Year.


Mishka’s new full length studio album, The Journey” will be released by Jimmy Buffett’s Mail Boat Records and hits stores and digital outlets worldwide on November 19th, 2013 and is expected to garner top chart positions in Billboard and on iTunes.


Mishka's releases have charted around the globe including his last three releases reaching the #1 spot on Billboard Magazine's Reggae chart. Mishka continues to tour extensively both solo and with his band playing clubs, theaters, and festivals all over America, Canada, the Caribbean, Hawaii, and Japan.