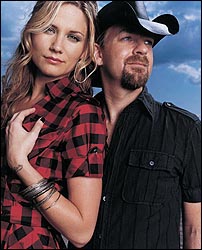 The Sugarland lead singer uses words like "hyper-stimulation" and "super-dynamic" to describe how she and musical partner Kristian Bush live on the fly, racing from show to show, event to event.

On this particular morning, in a hotel restaurant, she and Bush have just learned they would be performing "God Bless America" the next night during Game 4 of the World Series.

"People a lot of times will say, 'Oh, have they changed with all this fame.' No, they've changed, man, because they're out here working their butts off in a new environment they've never been in," Nettles said. "It's not fame or celebrity or money or anything like that. It's change because it's hyper-stimulation, it's super-dynamic."

Sugarland knows about change. They broke onto the charts a couple years ago with their debut album, "Twice the Speed of Life" as a trio. However, at the height of their success, chief songwriter and founding member Kristen Hall discovered she didn't necessarily want to live twice the speed of life and bailed. Nettles and Bush decided to carry on as a duo.

So far, it's working perfectly. "Want To," the first single from their new album "Enjoy the Ride," is No. 4 on Billboard's country singles chart. The album was released Tuesday.

"It's a super boost of confidence," Nettles said. "People ask, 'Are you worried about the sophomore slump?' I normally say, 'I don't give that any energy.' Once we wrote the first song — 'Settlin' — I thought, 'This is good. We're going to be fine.'"

Nettles and Bush, who both started out performing in rock groups in Atlanta where they still live, wrote or co-wrote all 11 tracks and co-produced with Byron Gallimore, who's crafted albums by Tim McGraw, Faith Hill and Lee Ann Womack.

"Garth (producer Garth Fundis) produced the first record, and we let him guide us into current contemporary country radio," Bush said. "But as we got into this album we figured we had been out in that country music radio world for a couple of years, and we wanted someone to expand what we were doing."

The new album isn't a big departure. The country-pop sound and sunny optimism are still there. But whereas the characters on the first album were eager to leave their lives behind for something more, those on "Enjoy the Ride" seem more comfortable in their skins.

The playful "County Line" celebrates small-town life with lines like "Kettle Corn and 4-H babies, pink slips and whitewall tires, bet you 20 I'll beat you there, down on the county line."

"The songs and the stories they're telling are great," said Mike Macho, music director at WKHX-FM in Atlanta. "It makes you feel good — that's the best way I could put it."

Sugarland took a different route to Nashville than most country acts. Already a popular regional group when they signed a major-label deal with Mercury Nashville in 2003, their grass-roots ascent is more typical of rock bands than country singers.

Hall, Nettles and Bush each were veterans of Atlanta's music scene before they joined forces. Hall was a singer/songwriter who had recorded a few solo albums; Nettles fronted popular local bands Soul Miner's Daughter and the Jennifer Nettles Band; and Bush was half of the major-label, folk-rock duo Billy Pilgrim.

"Twice the Speed of Life" simmered a while before it caught on with radio, but once it did, it took off, producing hits like "Baby Girl" and "Something More" and selling 2 million copies.

Sugarland was suddenly one of country music's hottest acts. But, to hear Nettles and Bush tell it, Hall became unhappy with life on the road and wanted to spend more time writing. It wasn't a surprise when she left in January.

"The road is not a life for everybody," said Bush, the father of two young children. "You don't really know that until you're there. But it's extremely hard on you physically, emotionally, on your home life. All that stuff gets pushed hard, and it's not for everybody, and she approached us and said it's not for her."

Luke Lewis, co-chairman of Universal Music Group Nashville, said the label left the decision on the group's future to Nettles and Bush. They could have disbanded and gone their separate ways, changed the group's name, perhaps added a new third member.

Nettles, a dynamo on stage with a booming voice that can be almost over-the-top twangy, had clearly emerged as the focal point and had even enjoyed solo success as a duet partner on Bon Jovi's crossover smash "Who Says You Can't Go Home."

But she and Bush had developed a chemistry together and had invested so much time and energy into Sugarland. They felt they had more left to say.

"We've had two years to be on the road for Kristian to work on his mandolin skills and for me to work with my vocals and find things that work with listeners," Nettles said. "This record is the next step in the evolutionary growth of who we are."

Quitting also didn't fit her personality, or his for that matter.

"We're type-A blood-smellers," Nettles said. "I think we're both dynamic people, and if we were not in the music business we'd probably be in the Peace Corps, something that requires us to change dynamically."

From a business standpoint, Lewis said the switch from trio to duo meant nothing. The only difference was that at awards shows they'd be fall into the duo category instead of the group category.

"It didn't change anything with marketing, but it has everything to do with the music — and the music is great," Lewis said.