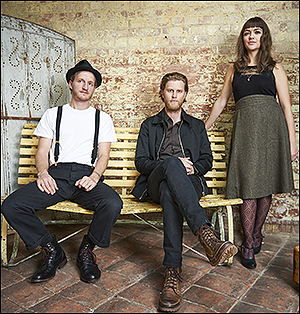 CelebrityAccess (Nashville, TN) – The Lumineers are in familiar territory this week as their single “Cleopatra” hits #1 on Alternative Radio Chart. It marks the third time in the band’s short two- album lifespan that they have hit #1. The song is the second single from the Lumineers RIAA certified Gold sophomore album Cleopatra to reach #1. Following the album’s first single “Ophelia” which, was the biggest rock single of 2016 according to Billboard.

The #1 caps off a great month of February for the Lumineers which began with the band appearing on the Tonight Show with Jimmy Fallon followed by selling out shows the next two nights at the iconic Madison Square Garden in New York. On February 10, the band joined the likes of the Foo Fighters, Stevie Nicks, and Randy Newman at MusiCares Person of the Year event which saluted Tom Petty.

The band continues their first arena tour tonight in Dallas. Later in the year, they will be opening shows for U2 in the US and supporting the aforementioned Tom Petty shows in the UK.

It took four years for The Lumineers to follow up their platinum-plus, multi-Grammy-nominated, self-titled debut – which spent 46 weeks on the Billboard 200 and peaked at #2 — but Cleopatra is well worth the wait. After exploding onto the scene with their monster single, “Ho Hey” (which spent a staggering 62 weeks on the Billboard Hot 100, peaking at #3) and its follow-up, “Stubborn Love” (recently featured on President Barack Obama’s Spotify playlist), The Lumineers spent a solid three years touring six of the seven continents. During that time, The Lumineers – whose original members Wesley Schultz and Jeremiah Fraites founded the band in Ramsey, New Jersey back in 2002 — earned a pair of Grammy nominations (Best New Artist, Best Americana Album), contributed two songs to The Hunger Games franchise (including the hit Jennifer Lawrence/James Newton Howard collaboration, “The Hanging Tree”) and sold an impressive 1.7 million albums in the U.S., and 3 million worldwide.

While “Cleopatra” is #1 at Alternative, the album’s third song “Angela” is steadily climbing the AAA chart, where it’s now in the top 15.

Cleopatra is named after the title track, inspired by a woman from the Republic of Georgia, an acquaintance of Wesley’s wife’s best friend whom he met while visiting there. The hard-bitten woman drove a taxi with a can of beer between her legs and a cigarette dangling from her mouth, having survived a hard-scrabble life, pining for the man who got away after her father died. “There was this level of defiance about her,” nodded Wesley. “She was accepting her fate, but still felt misunderstood.” Her story touched him so deeply that he felt he needed to write about it. You can watch and hear about the story: https://www.youtube.com/watch?v=3Zfm181ozbE&t=11s

Cleopatra also deals with what Wesley terms “the elephant in the room,” the band’s success and the way it can sometimes put a target on your back. The syncopated piano rolls in “Ophelia” (“I got a little paycheck/You got big plans/You gotta move/I don’t feel nothin’ at all”), the organic sound of fingers squeaking on guitar strings in “Angela” (“The strangers in this town/They raise you up just to cut you down”) and the Faustian bargain described in “My Eyes” (“Oh, the devil’s inside/You open the door/You gave him a ride/Too young to know/Too old to admit/But you couldn’t see how it ends”) consider the perils of getting what you wish for, with everyone knowing your name, and your songs.

Success hasn’t spoiled The Lumineers; rather, it’s inspired them to follow their muses even further.
“We continue to make the kind of records we want to,” says Wesley. “We believe in this music. It’s a true labor of love. We just want to keep reaching more people with our songs.”
Given the evidence on The Lumineers’ eagerly anticipated sophomore album Cleopatra, that shouldn’t be a problem.