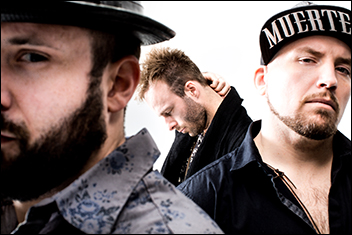 NEW YORK (CelebrityAccess MediaWire) — How do you get to #1 in Lima, Peru? Sounds like those vaudeville comics whose

answer is some lame joke accompanied by a cymbal crash, doesn't it? The alt rock, power trio, theSHIFT, has an answer and

while it comes with a bunch more cymbal crashes and rolls of the snare, there is nothing lame about it. All it has to do

is with timing, a great song full of hooks, and of course a good set of ears.


Guillermo Bustamante, the music director for Lima's Radio Doble Nueve (or rather Radio 99) was trolling YouTube and

latched onto "Dreams", the lead video/single off of theSHIFT's EP, 7th Direction. The station prides itself in finding

new rock tracks from outside the usual sources, so it's not really surprising that once they heard it they wanted this

one to enter their playlist. Out of the tens of thousands of videos uploaded to YouTube every day, and about 1/3 of them

are music videos, it is amazing they landed anywhere near theSHIFT and on "Dreams" in particular.


The station added it and shortly, it started racking up the requests and so, after a week at #3, it has kept the #1 slot

Forgot My Broken Heart" and Veruca Salt's "I'm Telling You Now." Why it caught on with Lima's rockers may be because

"Dreams" is no love song as it digs at the deeper wounds of life. and it moves with a propulsive force that pushes the

listener to a higher ground. It's a positive place as HITFIX noted, they are "pro musicians come together as transcendent


Individually, the members of theSHIFT are highly sought-after musicians who’ve recorded and toured the world with music

"all the energy and intensity of classic power trios such as Cream, Mountain and the James Gang…with a sound that is


After logging hours on stage and in the studio, the band was looking to create a space where they could jump into the

unknown—how rock concerts used to be, back in the day. “When you just play a song perfectly from start to finish there’s

no danger there,” explains Shannon. “When you choose to open it up in a way that’s in touch with the moment and the

audience, then you can get into some real danger, though some real truth.”