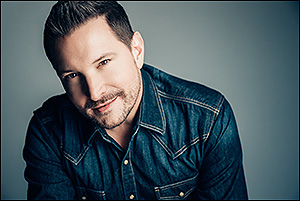 Nashville, TN (CelebrityAccess) – Ty Herndon’s much anticipated, full-length album House On Fire is now available on iTunes and Amazon. From track to track, Herndon has made the most engaging, meaningful and fulfilling music of his career. House on Fire is Herndon’s eighth career studio album, which reclaims the magic that was sprinkled throughout his first three records.

From the first note of opening track “That Kind of Night,” listeners are taken through an uplifting and purely joyful mix of love songs, biting anthems and unapologetic goodbyes. Featuring Herndon’s powerful trademark vocals, the new album is receiving critical accolades and being hailed as one of his best albums yet. It’s one of his strongest collections of records since 1998’s Big Hopes, which produced three Top 5 tracks.

In a recent article, USA Today states, “His expressive vocals, the surging romance of his lyrics — all the things that put him on the map with his No. 1 debut single ‘What Mattered Most’ are evident on each of its 12 tracks.”

Rolling Stone Country claims, "Herndon aims to put forth a newfound vulnerability… It's a new look, but one that suits him well."

The project has also garnered praise from People, Huffington Post, Rolling Stone Country, Sounds Like Nashville, and many more.

In support of the release, Herndon has also released three music videos to songs off the new album. Videos for “That Kind of Night,” “House On Fire” and “Fighter” are now available, and were directed by Trent Atkinson and edited by Jeff Matthews. Two other music videos have been shot and released. Herndon appeared on Prime Country (Ch. 54) as guest a DJ in November. House On Fire is a collection of 12 new contemporary songs, which are co-produced by Herndon and Erik Halbig, with Drew Davis joining as co-producer on six of the songs.

Herndon recently signed with BFD through Sony/RED Distribution, which marks Herndon’s return to the Sony family, where he made his chart-topping debut in the mid-90s.

Herndon’s 20-year career has resulted in an impressive string of hits, which includes four No. 1’s (“What Mattered Most,” “Living in a Moment,” “It Must Be Love,” “Loved Too Much”), as well as numerous top 10 hits, including “I Want My Goodbye Back,” “Loved Too Much,” “A Man Holding On (To a Woman Letting Go),” and “Hands of a Working Man.” He’s had 20 Billboard charted singles to his credit, numerous industry awards, and more than five million albums sold.