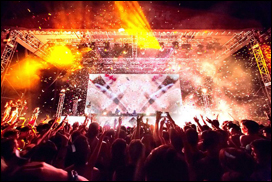 Without a doubt, electronic music culture has exploded to almost unfathomable heights. With roots in North America, a longtime embrace and sustained culture in Europe, and subsequent resurgence back in the United States, the sounds of this culture are now being heard and felt all the way across waters into a new and hugely expanding market – the Asia-Pacific. Leading the conversation of what’s happening in the region, the International Music Summit held the first ever IMS Asia-Pacific summit in Singapore last week, and it couldn’t have come at a more appropriate time.

Industry icons from nearly all countries across the region attended this one-day event held the same weekend as the legendary ZoukOut Festival (pictured above). The summit took in keynotes, one-to-one interviews, business reports about the value of the region, and the odd bit of explosive words from a certain promoter in Korea!

PMIMS it is widely considered the “TED Talk” of electronic music. It is an educational, inspirational and motivational thought leadership platform dedicated to creating awareness of, and appreciation for, electronic music, the artistry related to DJing and all related popular art forms, primarily through the presentation of summits and events that celebrate the historic and ongoing contribution of the genre to art and culture worldwide. Presented by Pete Tong (BBC Radio 1), IMS hosts major events annually in Ibiza, Los Angeles and now Singapore.

I’ve been privileged enough to be a part of IMS through Fame House, where my team and I look after their digital marketing and social media efforts, and have aligned ourselves as an official partner. This alliance could not be more fitting for both sides, as the rise of electronic music in the U.S. – and now Asia – is directly correlated to the rise of digital.

Here’s an overview of what went down last week at IMS’s first ever event in the region – taking place at the beautiful W Singapore in Sentosa Cove.

The day started with the first IMS Business Report for the region (available here in its entirety, read it – the numbers tell the story) estimating that its value is 1/6th of the global electronic music market at nearly $1 billion.

"A significant number of Asia-Pacific clubs rank in DJ Mag's Top 100 Clubs and boast the largest, fastest-growing social media fans in the world," said IMS Analyst Kevin Watson. "There are many large festivals across Asia-Pacific now, including Sunburn Goa, which is as big as Tomorrowland."

India alone was of interest to Watson in this report: "If penetration in India reached just half the USA's, it would be equivalent to 18 new festivals the size of Tomorrowland."

Sandy Monteiro (President, Universal Music Group, South East Asia) challenged the electronic music industry in Asia to address the concerns over drug deaths at its events or forfeit the huge potential of partnerships with brands in Asia.

"Asia is at a tipping point for an EDM explosion,” he said. "The genre is the driving beat behind pop music and product sales. The top five countries for Universal Music streams in the Asia-Pacific region are Korea, Thailand, Philippines, Indonesia, and Malaysia.”

Dr. Gino Yu (Doctor of Music & Medicine, Hong Kong) inspired the delegation with a talk about transformational music – deciphering fascinating cultural differences, which could be challenging for the genre’s growth.

“EDM is the contemporary incarnation of global transcendental connectedness through music,” he said. “However, EDM in the West is tied to drug culture, and there is a lack of local talent, infrastructure, and models. There exist some cultural challenges, but plenty of new opportunities too!”

“It's important we don't focus on booking strictly huge international artists in India because we have so much talent,” said Indian DJ Arjun Vagale. “That is critical if we are to build our own healthy scene."

"25% of our performances have been in Asia the last four years," the NERVO duo told audience members. “It’s only going to get bigger.”

The two later encouraged promoters to have their own local talent headline major festivals in order to secure support of regional fans to allow their own scenes to grow. Both Damian Lazarus and NERVO made a call for new electronic music with flavors unique to each region across Asia-Pacific, encouraging native producers and music makers to ensure their region truly has its own sound.

Gilbert Yeung, owner of Dragon-I and the Tazmania Ballroom in Hong Kong talked to Chris Ho of Lush Radio about his scene.

“Hong Kong is a friendly open market, but it's getting competitive,” he said. “People have more choices; clubs must deliver higher quality.”

Promoters from global stature events from China, Hong Kong, South Korea, Singapore and Japan all discussed the huge growth they are experiencing. JC Ahn (International Director, VU ENT / Global Gathering / Life in Color, South Korea) challenged people for getting into the business for the wrong reasons with a torrent of harsh words.

"If you're doing this for money, for greed, to be cool… you're a dumbass,” he said. “You should not be in this scene if you're not going to have the heart for it."

With drug related deaths at dance music events being highlighted more and more by media, the panel decided to tackle the issue head on.

"The government in Hong Kong often addresses drug use though propaganda and not though education," said Jason Swamy, promoter for Do What You Love / Robot Heart, Hong Kong.

Frank Cotela (Onelove Recordings / SFX Totem / Stereosonic, Australia) had words for promoters supporting local, regional talent: "If you're a promoter, don't be afraid to support your local artists. They'll be making you your money in the long run."

“We've reached a point where a good idea, even if it comes from the North Pole, it can go global overnight,” spoke Andrew Bull (Director, Shine Communications, Shanghai) on how digital will only continue to be a driving force in the growth and advancement of electronic music culture.

Steve Angello then talked with Pete Tong about his passions and experiences in Asia-Pacific.

"If you remain true to yourself, there will be opportunities out there for you," he said on regional artists standing out and reaching a mass scale. Angello also expressed some frustration with the overall scene being complacent with music that isn’t pushing any creative boundaries.

"People have forgotten the essence of creating music," he said. "We're supposed to make music but if you don't challenge yourself, what's the point? Taking a risk in dance music today is not booking a pop artist. I think as a whole, we need to pause and think about our (scene's) future plans."

Richie Hawtin joined the debate about Get Played Get Paid hosted by the Association for Electronic Music – trying to ensure artist payments end up in the right hands.

“The more information we put out there, the more our scene can continue to grow and be independent," he said.

And the godfather of dance music in Asia-Pacific, Lincoln Chen of Zouk, talked with Paul Oakenfold about his opening years in 1987, the influence of Ibiza on his club and he was honoured with the IMS Pioneer Award for his work in the region.

And then to the parties, where Pete Tong played for the first time with daughter Becky Tong, then NERVO closed out the event at W Singapore, followed by Paul Oakenfold performing at Attica with a surprise opening set by Steve Aoki.