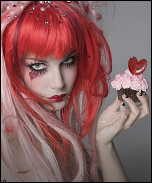 My Dearest Plague Rats,
It is with a sad and heavy heart that I announce to you that I must postpone the Fall N. American tour dates until early 2011.
Instead of singing my little heart out with all of you and throwing cups of tea where they don't belong, I will be recovering from some very unpleasant surgery on my jaw. (Yep, the very same jaw I employ in the tasks of holding a violin and singing with…why couldn't it be a foot or something I don't really need?) Without going into gory detail, this is a surgery that I have been needing to have for several years, and only now that my jaw has threatened complete dislocation am I actually forced to attend to it. The truth is that, not only am I unable to entirely open my mouth at the moment (a blessing to many), I have been advised by my doctor (you know how much I love those) that, if I do not have this surgey immediately, serious and irreversible damage will undoubtedly occur. Thus, I will go under the knife within mere days, and will be in recovery for several weeks after, but, during that time, will be rescheduling all N. American dates, AND adding even more cities to the tour!…

Dates for "The Asylum Tour: The Door, S. America 2010" have been released but should not be affected by the surgery according to Autumn's website, she should be "fine and dandy" by November.