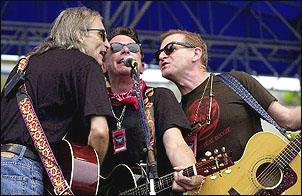 The Association For Independent Music handed out its 2003 Indie Awards March 18 at a luncheon during its convention at the Orlando World Center Marriott. The AFIM confab was held in conjunction with the National Assn. of Recording Merchandisers convention.

And the winners are:

Mambo Legend Gets Star on Walk of Fame

LOS ANGELES (AP) — Israel Lopez, better known as "Cachao," the Cuban bass player credited with helping to create the mambo, was honored with a star on the Hollywood Walk of Fame.

The 84-year-old Grammy winner received the walk's 2,219th star Friday in front of King King, a nightclub. In his honor, a Cuban band performed at the nightclub after the ceremony.

"I am very proud," he said in Spanish, according to Ana Martinez-Holler of the Hollywood Chamber of Commerce.

On hand for the star's unveiling were Lopez's wife, dozens of fans, actor Edward James Olmos and Andy Garcia, who produced and directed a 1993 documentary on Lopez that helped revitalize his career.

After the documentary was released, Lopez played to a sold-out crowd at New York's Radio City Music Hall.

"He is the greatest living example of music in that country (Cuba)," said Garcia, who is Cuban-born. "One thing that is very important for Cachao is that he wants to preserve the roots of Cuban music.

Lopez has won several Grammy Awards — including one this year — for his own work and his contributions on albums by such Latin music stars as Gloria Estefan.

Lopez was born in Havana on Sept. 14, 1918, to a family of musicians. His parents, brother and sister all played bass. At 8 he was playing bongo and at 9 he was playing bass. He got a job with a band that provided music to accompany silent films.

From about 13 to 44 he was a member of the Havana Philharmonic Orchestra.

He also performed with jazz orchestras, utilizing Afro-Cuban rhythms. He and his late brother, Orestes, are credited with creating the mambo in 1939. The musical style, popularized by bandleader Damaso Perez Prado, inspired a dance craze that swept the world in the 1950s.

Lopez and his brother also wrote more than 3,000 danzones or Cuban ballroom dance tunes — sometimes creating more than two dozen in a week.

Lopez also is considered a master of descarga, the influential Latin jam sessions.

Lopez left Cuba in 1962 and settled in New York, later moving to Miami.