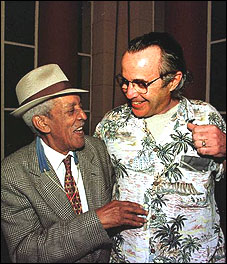 American guitarist Ry Cooder says his latest collaboration with Cuban musicians could be his last. Cooder helped put the country on the musical map after bringing together a group of Cuban musicians to make the Buena Vista Social Club album in 1996.

The project was an unexpected commercial and critical smash, earning a Grammy and becoming the best-selling release of Cooder's career.

But the US Government banned Cooder from working with musicians from the communist country again, fining him $100,000 under America's Trading With The Enemy Act.

The act places tight restrictions on the dealings US citizens can have with the communist state.

President Bill Clinton stepped in during his last week of office in 2000 and persuaded the government to give Cooder a year reprieve.

As a result Cooder went back to Cuba and worked on two projects – an album with legendary guitarist Manuel Galban and one with singer Ibrahim Ferer – which is due for release this week.

But he fears he will not be able to repeat the exercise.

"When I say this is a classic Latin record what I'm really saying is it might be the last chance to do this kind of mingling of people and styles," said Cooder.

"Politically I can't do it again so I have to say that is the best I can do."

The musicians – many of whom are in their seventies and eighties – were featured in a 1999 film by the German director Wim Wenders.

As the film shows, Cooder and Cuban colleague Marco Gonzalez had to persuade the musicians to take part.

The album alone sold more than one million copies – launching the musicians to the fame and fortune which they had thought had passed them by.