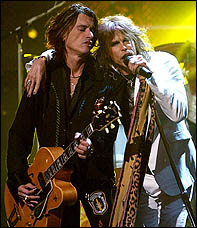 In celebrating its fifth anniversary and over 170 profiles, VH1's "Behind The Music" will have its first ever two-hour episode

with Aerosmith premiering September 1 at 9 PM (ET/PT). "Behind The Music: Aerosmith" features footage from a trove of several thousand hours of original and
archived film and video (much of it never
before seen), plus exclusive new interviews with Steven Tyler, Joe Perry,
Tom Hamilton, Brad Whitford and Joey Kramer, plus actress Liv Tyler and many
more. And in this first-ever two-hour "BTM" episode, complete access on the
band's recent "Just Push Play" tour in the US and Japan – with cameras
everywhere from backstage, to the hotel suites, to the tour buses and the
private planes, and occasionally in the bathroom – lend a voyeuristic
present-day perspective rarely seen of the band.

Aerosmith discuss in bone-chilling detail their struggles with drugs, detail
the ego battles and personal disputes among the band members and their wives
that led to their nasty breakup in 1979, and speak out bitterly about their
former managers and how financial mismanagement and drug binges left them in the poorhouse — until their massive comeback in the late '80s.

NEW YORK (AP) — LIFEbeat, a nonprofit group that works with the music industry to fight AIDS, is celebrating its 10th anniversary with a concert featuring The Hives, Jimmy Eat World and Sugarcult.

"We are proud to have reached the 10-year milestone — and we believe our programs have been responsive to the course of this epidemic, especially as it relates to teens and young adults," said executive director Alan Fields.

The benefit concert, on Wednesday at the Hammerstein Ballroom in Manhattan, is part of MTV's pre-Video Music Awards celebration. The VMAs are set for Thursday at Radio City Music Hall.

LOS ANGELES (AP) — Singer Michael Bolton received a star on the Hollywood Walk of Fame on Tuesday while touring to promote his album "Only a Woman Like You."

Bolton, 49, accepted the honor amid a throng of admirers at a ceremony on Hollywood Boulevard, across from the historic Chinese Theater and next to the Roosevelt Hotel.

The two-time Grammy winner's hits include "Forever," "Living Without Your Love," "Just the Thought of Losing You" and "How Am I Supposed to Live Without You?"

Bolton, whose star was the 2,203 on the Walk of Fame, is scheduled to perform at several venues in Southern California through the week.