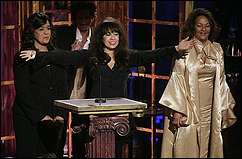 by Bob Grossweiner and Jane Cohen


NEW YORK (CelebrityAccess MediaWire) —
Van Halen was not the only fractured group inducted into the Rock and Roll Hall of Fame on March 13 at the Waldorf-Astoria Hotel in New York, just the most publicized. Neither the industry executives at the $3,000 a plate affair nor the viewers watching live on VH1 Classic nor the streamers on AOL witnessed what happened in the press room.

The four living members of the Furious Five came to the press room a few hours before being inducted so the obvious question of how it felt to be inducted was pointless. After posing, primping and playing to the cameras, they answered a few questions and said they wanted to do a world tour. However, they never mentioned Grandmaster Flash. A few minutes after they departed, Flash entered the press room stage, filibustered on one question and departed, never mentioning the Furious Five. It's doubtful the world tour will happen. The group broke up in the 1980's reportedly because Flash and Five's Melle Mel got into a dispute. This is the first time in memory that artists appeared in the press room before being inducted, but some reporters felt they wanted to make the late television news programs, and they probably would not due to the schedule.

The Ronettes were another story. Ronnie Spector, who had received some incredible press, perhaps a bit controversial the past few weeks leading up to the induction, came to the press room alone, posed for the photographers and left. Next, her cousin Nedra Talley, who reportedly has not spoken to Spector for more than a dozen years, entered the press room and took a few questions. She ruled out a Ronettes reunion tour: "We'd never have the true Ronettes like I remember it," she said, "and like you remember it."

She also said that the third Ronette, Estelle Bennett, who is Spector's older sister, was too ill to perform — she did not perform earlier in the evening just like at many shows in the early days and on recording sessions where Spector was joined by other "Ronettes" — and too ill to go backstage. However, a few minutes after Talley left, Bennett and her daughter came out to talk and pose for the press. A fast recovery no doubt.

After the long, four hour-plus extravaganza, Michael Stipe and Mike Mills met the press while Peter Buck and Bill Berry opted out. Nothing should be read into this as this has happened at previous induction ceremonies where members refuse to meet the press.

Interestingly, it was the two ousted members of Van Halen — Michael Anthony and Sammy Hagar — who represented the band and appeared to have the most fun of the night. Joking around, posing and talking freely, they had a ball. Hagar opened the question period by saying, "We'll just give the answers. We know the questions."

The press was kind to everyone this year as opposed to previous years and never really pressed on the obvious Van Halen issues. "I totally encourage the thing with Dave," Hagar said of the summer's planned reunion, now canceled. "If Van Halen has any move, they should do it for the fans right now: do a reunion with Dave. If we all grew up, including me, maybe all of us could do it together," Hagar said of possible future Van Halen tour with him and David Lee Roth. "I planned on taking this year off and just hanging with my family," Hagar said. "I haven't done that for a long time. I will tour from my birthday in October through next year."

Hagar thanked Barbara Skydel and Frank Barsalona for booking all their tours; Anthony thanked the group's late manager Ed Leffler, among others. Anthony also felt that Roth would show up right at that moment, but he did not follow his m.o.

Velvet Revolver then joined Van Halen on the press platform — both are managed by Irving Azoff, thus the connection of Revolver inducting and performing for Van Halen — and talked about their involvement in the evening. "We were asked to perform," said Revolver's Scott Weiland. "Kinda what happened was, he wanted to sing the song 'Jump.' We felt from an artistic standpoint, and I'm being totally honest with you, that it wasn't a song we felt comfortable with; we don't have keyboards. To bring a keyboard on stage wouldn't work for us. We said we'd do 'Jamie's Cryin'' or 'You Really Got Me," and Dave was adamant that wasn't okay."

Weiland also said they were supposed to perform for the Sex Pistols' induction last year when the Pistols boycotted the event.

CelebrityAccess asked Keith Richards when the Stones were going to tour again. "No doubt we'll be back on the road," he said in his most coherent fashion in the history of the gala — he did not even laugh to himself. "I have no idea when; actually, I know, but I'm not telling you."

He said there might be an Expensive Winos tour down the line as well. "I'm planning ahead," he acknowledged, "…to tomorrow."

So with nine out of 10 inductees and inductors plus a few others meeting the press, the press room was much more active than in the past few years when just 10 to 20 percent would come to chat with the Fourth Estate.

That the Van Halen brothers and Roth did not show needs to be taken in an historical perspective. Paul McCartney did not show up for the Beatles' induction in 1988 due to his legal battles with George Harrison and Ringo Starr. Diana Ross did not show up the same year when The Supremes were inducted due to her rift with Mary Wilson. Three years later Levon Helm stayed home when The Band was enshrined. Perhaps Paul Simon said it best in 1990 when he suggested for a separate wing in the Hall for members who no longer got along with each other.


Smith was all by herself in the press room. Interestingly, she and the Patti Smith Group have appeared individually on the ballot for many years — five times as a solo artist and twice as a member of her group–but no one asked her about how she felt the group being left out.