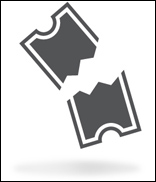 WASHINGTON (CelebrityAccess MediaWire) — A new website has been launched by a coalition formed by members of congress, industry trade associations and public advocacy groups to rally support against the impending Live Nation/Ticketmaster merger.


The website, Ticketdisaster.org, has little content yet, consisting primarily of a list of 5 "key facts" that underscore negative impact that the site's sponsors believe the merger will have on the live entertainment industry.


The bullet pointed facts listed on the site:


2. Ticketmaster uses multiple means to take advantage of consumers and increase the price of tickets and services, a practice that will grow with increased control over the market.


4. Ticketmaster has a track record of initiating anti-competitive practices to block competitors from accessing their events.


5. Blocking the merger outright is preferable to approving it with conditions.


The website lists sponsorship by the ticketing industry trade association, The National Association of Ticket Brokers, consumer advocacy group The National Consumers League and has a link to the home page of Democratic Congressman Bill Pascrell from New Jersey's 8th district.


Pascrell has been a vocal opponent of the merger and he offered testimony to that effect before a house subcommittee earlier this year. Pascrell is also one of the sponsors on a bill that would subject ticket sales, including the secondary market, to FTC regulation. The proposed legislation includes a provision that would require the disclosure of the number being offered and restrict resale within 48 hours of going on-sale at the box office.


"All of us agree that it was time to take this fight to the seats. That's where the fans are, and they are the people who have had virtually no opportunity to represent their interests in the pending merger of these two companies — until now," said Pascrell in a statement. "These Web sites will give the fan, the ticket buyers, the information they need to understand how they will be affected by the proposed merger as well as give them the chance to voice their opposition to the pending deal to the U.S. Department of Justice's antitrust authorities." – CelebrityAccess Staff Writers