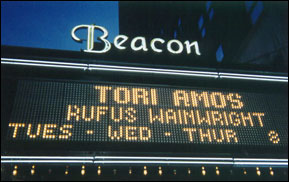 NEW YORK (CelebrityAccess MediaWire) — MSGE Entertainment has announced plans for a $15 million refurb for the Beacon Theatre in New York what will restore the iconic theatre to its original 1929 condition.

The Beacon Theatre, a 2,800-seat venue located at Broadway and 74th street in Manhattan, was the brainchild of the famed theater impresario Samuel "Roxy" Rothafel. In 1927 noted Architect Walter Ahlschlager was commissioned to design the theater, named the "Roxy's Midway", for live vaudeville and silent film presentations. Shortly after the theater was completed, it was taken over by Warner Brothers and remodeled to accommodate movies. It was at this time that the theater was renamed the Warner Brothers Beacon Theatre.

Fast forward to 1979 when the NYC Landmarks Preservation Committee designated the building as a Landmark and the building was retasked to a music venue and has seen performances by the Rolling stones, Jerry Garcia, Aerosmith, Michael Jackson, the Allman Brothers Band, Radiohead, and Queen to name a few. MSG Entertainment acquired the building in November of 2006.

The restoration will focus on the interior public spaces of the building. Backstage and back-of-house areas will also be renovated. The restoration will be based on extensive historic research, as well as detailed on site examination of original decorative painting techniques that have been covered by layers of paint for many years.

Other upgrades will include acoustic improvements, additional speakers and other sound system upgrades, improvements to the concession stands and restrooms, backstage renovations and the addition of a green room.

The upgrades are expected to take 16 months and the theatre is expected to be back in business by February 2009.

"The Beacon Theatre is one of New York's most enduring landmarks and as we stated when we acquired the Beacon in 2006, we are committed to using our resources to ensure that all of our venues offer music fans the highest quality of entertainment in an unparalleled setting," said James L. Dolan, President and Chief Executive Officer, Cablevision and Madison Square Garden. "Like our restoration of Radio City Music Hall and our $500 million renovation of Madison Square Garden, our goal with the Beacon is to ensure that the greatest city in the world has the iconic venues it deserves."