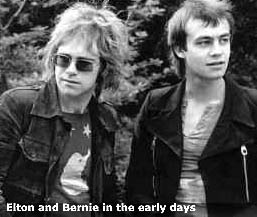 Elton John says he has gone "back to basics" to produce his new album, "Songs from the West Coast," and he believes it's the best one in 25 years.

Elton said the album, which is due out on October 1, was recorded in a studio in Los Angeles with musicians he'd never worked with before.

"So I was a bit scared of working with them," he told the Sunday Telegraph magazine. "Of course, I hadn't written anything before I went into the studio. Ha! Ha! Ha!"

Elton said he has "gone back to basics," returning to his original line-up of piano, guitar, bass and drums after realizing that he had scarcely played the piano on his last few albums.

"I can truthfully hold my hand up and say this is the best thing I've done in 25 years," he said. "And that feels good." The album came about after Elton and lyricist Bernie Taupin met in Nice last year and decided that, though there had been good things on the last three albums, there had not been enough "consistency, not enough head-down."

Three months later, Taupin handed over the lyrics for dozens of songs and "Songs from the West Coast" was born.

In the wide-ranging interview, Elton also talked about his seven-year relationship with David Furnish and his struggle with alcohol and drugs that ended 11 years ago when he became sober.

"I think a lot of my sexual bravado was provided by drink and drugs, and since I've stopped I'm not as, um, sexually inventive," he said. "I mean, wine and coke, you'll do anything! And I miss that…and I feel terribly guilty with David, because he drinks, and all my friends drink and they have such a good time and sometimes I think, 'I feel like an old frump."'