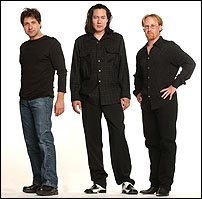 (CelebrityAccess MediaWire) — Big Head Todd & The Monsters have penned NASA’s new theme song, “Blue Sky” for the space shuttle’s return to space. NASA has invited the trio to be on hand as VIP guests at the Kennedy Space Center on July 13 when Discovery lifts off on its 13-day mission.

“Blue Sky” will be available exclusively through iTunes on July 12, and will appear on the group’s next album.

Singer/songwriter/guitarist Todd Park Mohr wrote "Blue Sky" at the urging of John Horan, deputy program manager for ASRC Aerospace Corporation, NASA's research and development contractor. "John's a fan and came on our BHTM Fan Cruise in January," says Mohr, referring to a week-long excursion of the British Virgin Islands which the band hosts for 240 fans each spring. "We got to talking, and he said they've used 'Rocket Man' so much and wanted a song specifically about the American shuttle program."

After the tour, Mohr returned to his solar-powered studio in the Colorado mountains and started doing research about NASA. "I drew on my experience from visiting the Kennedy Space Center with Brian and Rob, where we were given a behind-the-scenes tour. I also utilized the astronauts' autobiographical material posted on the NASA website. I am a believer in space exploration and believe the effort is in many ways the cream and flower of human achievement."

The band’s current tour runs through September 16, winding down in Deadwood, SD: