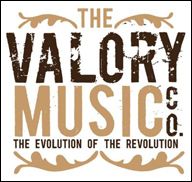 "Our objective for The Valory Music Co. is to continue the momentum that has been achieved with Big Machine by not only replicating our current culture and our recent successes, but also by taking everything that we've learned over the last two years and pouring it into this exciting new venture," explains Borchetta. "We continually re-engineer what we think we know and we feel like we've identified an incredible opportunity with the simultaneous availability of some incredible artists and record executives. The energy that has come together for this launch is truly incredible."

"We are extremely excited to announce that we have entered into a multi-album deal with one of the most amazing female vocalists of all-time, Jewel," continues Borchetta.

With over 27 million albums sold worldwide and with three Grammy nominations under her belt, Jewel's Country roots go back to her upbringing.

"I grew up on a ranch in Alaska, and my favorite memories are of sitting around a camp fire with my father and listening to the songs he wrote and sang. It was pure country music, and it has made me a sincere fan of country music ever since," says Jewel.

Her first single for The Valory Music Co. is scheduled for the first quarter of '08.

The Valory Music Co. will have its own exclusive promotion branding team while utilizing existing Big Machine Records backroom services. Jon Loba, who comes to the label after leading Broken Bow Records to incredible success, will lead the new branding team as VP of Promotion & Artist Development. Chris Loss joins the team from Lyric Street Records where he had become the leading West Coast promotion force in Country Music. Chris will elevate his status at Valory as National Director of Promotion and continue to cover the West Coast from his Scottsdale, AZ office. Southeast promotion & marketing will be directed by one of the brightest new talents in Country Radio promotion, JoJamie Hahr. JoJamie comes to The Valory Music Co. branding team from successful stints at MCA & BBR. Another incredible young talent, who is new to promotion but not new to Country Radio, is Miranda Williams. Most recently from CMT Radio Networks, Miranda will direct promotion & marketing for the Southwest region.

Borchetta continues, "We live in a world of consumers who 'want it now', while in the same breath, artists want their music 'out now'.

Big Machine, in essence, is full right now from an artist development and brand building perspective. Taylor Swift, Trisha Yearwood, Jack Ingram and Pearl Records' Garth Brooks are currently in play with hit singles in the marketplace. We have an incredible new Danielle Peck album that will be released in early '08. To add any more releases to the Big Machine branding team severely weakens chances for success. I made a very conscious decision earlier this year – I either had to drop some artists that I truly believe in and stop taking artist meetings or find another opportunity for these great artists and their music. Today, The Valory Music Co. is that opportunity!"