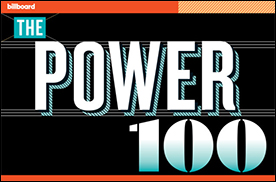 SANTA MONICA, Calif., (CelebrityAccess) Universal Music Group Chairman and Chief Executive Officer Lucian Grainge was at the top as Billboard announced its annual list of the 100 most powerful people in the global music industry.

Grainge is the only executive to appear at No. 1 on the Billboard ranking three times – 2013, 2015 and 2016 – and he is the first to hold that rank for consecutive years.

In addition to building on the company's exceptional track record of developing and breaking new artists, Billboard this year also cited Grainge's entrepreneurial strategy behind the company's expansion into technology, branding and film to produce new creative and commercial opportunities for artists and labels.

"This is an enormous honor and a recognition of the work of our entire Universal Music team, many of whom are also individually recognized on the Power 100 list," Grainge said. "True power originates with the artist and their creativity, and it's amplified by the dedication and passion of our employees around the world. And as much as we've accomplished so far, we have truly only just begun. We remain focused on leading the industry into an exciting new future and we're committed to a vibrant music ecosystem that's in the mutual interest of all participants."

Live Nation CEO Michael Rapino was #2 on the list, with the Apple Beats crew – Trent Reznor, Jimmy Iovine, Robert Kondrk Eddy Cue – all sharing the #3 spot on the Billboard list.

Veteran manager Irving Azoff, who at the end of 2015 announced the formation of Oak View Group, a new entertainment company with former AEG exec Tim Leiweke slipped 3 spots to come in at #6 on the list. Red Light Management's Coren Capshaw, whose management, touring, branding, venues, festivals, labels and merchandising concerns are estimated to have grossed $1 billion-plus in revenue in 2015, was cast as #7.

The billet for #8 went to Len Blavatnik, the Ukrainian industralist who acquired Warner Music, while Creative Artists Agency Partner/Managing Director/Head of Music Rob Light took #9 and Spotify Music's Daniel Ek vaulted from rank 20 last year to round out the top 10.

For the full list, check it out at Billboard.com