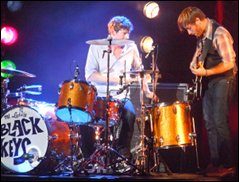 NEW YORK (CelebrityAccess MediaWire) — The Black Keys have called off their tour of Australia and New Zealand, as well as some of their European tour dates.

The band has cited exhaustion as the cause of the cancellations, and after recent appearances on Saturday Night Live, as well as Late Show with David Letterman, fans are sure to be disappointed.

The rock duo was due to head to New Zealand this week to play two shows, before heading to Australia for concerts in Sydney, Brisbane, Perth, Adelaide and Melbourne, as well as an appearance at the Gold Coast's Big Day Out festival.

All the gigs have now been scrapped, along with shows in Germany, Switzerland and France in March.

The duo has released the following statement on their site:

"The Black Keys are sorry to announce the cancellation of the New Zealand and Australian tour including all appearances at the Big Day Out touring festival as well as a portion of the European tour in March.

An arduous year of touring and promotion has drained the band and necessitated time off.

Dan and Patrick wish to thank all of you who have shown such incredible support since the release of Brothers and have helped make the album a success."