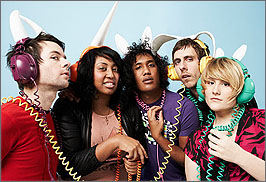 The Jacksonville Florida-based band has had a busy year since the July release of their debut album, "Partie Traumatic" on Columbia Rex. Several tracks from the album charted strongly in the UK and Black Kids did the UK festival scene with stops at Radio 1's Big Weekend in May, Glastonbury Festival in June, and T in the Park and Camp Bestival.

Back in the states, the Kids hit both Coachella, and CMJ's Music Marathon in NYC and have received positive press in the blogosphere with Pitchfork giving a "Best New Music" commendation. Check them out on YouTube here.