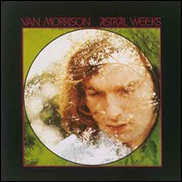 I was surprised to see the Hollywood Bowl half full. After all, this was ASTRAL WEEKS!

But not that many people remember. Or worse, never knew. If Van Morrison has crossed over to the younger generation, it couldn’t afford tickets to last night’s show, because youngsters were not in attendance. Not twentysomethings, not kids.

Used to be the fame came second. First came the joy of playing music. And the sheer excitement, the talent of the performers, infected us. We couldn’t get enough of their music the way kids today can’t get enough of Facebook. If we wanted to connect with our tribe, we went to the show. There was a myriad of acts. Many of whom are still on tour.

Running on fumes. They play the tunes, a synapse fires, you remember who you used to be and that’s supposed to give you your money’s worth. And maybe that’s why attendance figures for many of the oldsters are lagging. There’s no emotion left, just memories. Especially with the irascible Van Morrison. He didn’t seem to care about the
audience, he seemed to be doing it for the paycheck, he was tortured by demons for sure, but it was a private battle, we were left out of it, so many of us left Van on his own. He’s been on the road for too long, disappointing us at high prices. BUT NOT LAST NIGHT!

Can’t say Van’s number one in my pantheon. Got hooked on "Moondance" when my sister came home from college and bought it, needing to relive her dorm room days. Sang along, drunk as a skunk, to "Wild Night" in the local bar in my college days. Went to see him do "Wavelength" at UCLA. I had to be in the right mood for his music. But, when it worked, nothing else would do, it was superior. Like with "And It Stoned Me". That’s my favorite track of his. Sung like a hillbilly coming over the knoll with his fishing rod over his back. A picture of real life. Oh, the water, oh the water, this was the seventies, when you sang about what you felt, what you lived, not what businessmen in suits told you the audience wanted.

Still, he was performing ASTRAL WEEKS!

align=left>I bought it on vinyl, many years later. Never gave it a good enough listen. Played it a bunch in the past week and some of its magic rubbed off. Still, I needed to hear it back then, in the seventies, when music was the backdrop to our lives.

I figured Van would punch the clock, play a few obscurities, a recognizable hit, then do "Astral Weeks". I did not know Van Morrison had something to prove. That not only was he still relevant, but he could trump all the wannabes with all the press. Last night’s gig was akin to watching Prince at the Super Bowl. It was a master at work, one who had not lost a step.

He started off with "Wavelength".

Actually, he started off playing his harmonica. We were instantly jolted to way back THEN! When music counted, when it made all the difference, when we lived for it. It was like the Fillmore East back in the sixties, with just a few more in the assembled multitude.

You could tell Van knew this counted. He wasn’t smiling, but he was delivering. The way a long in the tooth attorney digs deep to fight one more unjust murder accusation. All the chops were on display. Without saying look at me, you could see forty years of history. A real act, who reunited us with what once was, and stunningly still is. If you want to know what infected us, if you want to get it, you should have been there last night.

From there it was on to "St. Dominic’s Preview". An album I never bought, but the title track of which I know oh-so-well. It was better than the recorded version. Because Van sang the title with such EMPHASIS!

From there came the "Last Waltz" classic, the aforementioned "Caravan". If you don’t think Van stole that movie, you didn’t see it. I’m sitting there connected to who I used to be, older in flesh but not mind.

He was playing all the greatest hits he doesn’t. Or does perfunctorily.

"Here Comes The Night" brought us back to the sixties.

"Brown Eyed Girl" superseded all the lame covers bar bands do to gain the audience’s attention.

And when I heard "Gloria" I had to lift my geriatric body and dance along, to one of the garage classics. But unlike most garage bands, Van had survived. And prospered.

Oh, he did some relative obscurities. "Astral Weeks" was as ethereal as the original record. But what struck me most was the master at work. Fronting a 13 piece band like it was his. Conducting the players with his hands, throwing in organ and guitar fills when necessary. It seemed effortless. Like he was born to do this.

And maybe he was. To think this used to be a reasonable profession. To be a musician. Following your muse around the world. Not worried so much about your chart position or your audience as getting it right in your own mind. Figuring people would follow you if you got close to the flame, if you nailed it for yourself.

He’s past sixty. He’s not skinny enough to be on a sitcom. But with his hat and sunglasses, his fine clothing, Van Morrison was a star. You didn’t sit in the audience thinking YOU could do this. You were watching a virtuoso at work. You thought of how kids might be home in front of a screen, but you were where you were supposed to be, where it was happening, at the show.

You really missed it.