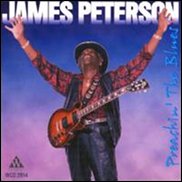 Peterson died of a heart attack, according to friends of Peterson's family as reported by Tampa Bay Online.

Born in Russell County, Ala., Peterson heard the blues early on while working at his father's juke joint, according to a biography posted on Answers.com.

Peterson took up the guitar after leaving home, and became a club owner himself in 1965, opening the Governor's Inn House of Blues in Buffalo, N.Y. Jimmy Reed, John Lee Hooker, Howlin' Wolf, Junior Wells, Koko Taylor, Muddy Waters and Buddy Guy were among the blues greats to play the club.

Peterson relocated to Florida in 1980 but had all but ceased performing by the mid-'80s.

His son, Judge Kenneth "Lucky" Peterson, though, a gifted guitarist, organist and singer, was active in the Tampa area, playing with Gene "Sarasota Slim" Hardage. The elder Peterson joined his son and Hardage onstage in 1987 or 1988, Hardage remembers.

"He had such a good time he came back the next week," Hardage says. "That was the beginning of James' involvement in Tampa's blues scene."

From then until he moved back to Alabama about five years ago, Peterson was a consistent presence on Tampa area stages, known for raunchy blues and energetic showmanship that found him walking through the crowd playing his cordless electric guitar, joking with audience members.

He also was beloved by area musicians who played in his band, sat in with him or were encouraged by him.

"He was he was always a great teacher," says George Harris, who runs Panda Studios in Clearwater. "Knowingly or not, MANY great artists owe him a debt we can only repay by passing it on."

Scott Peterson, no relation, of local blues act The Quivering Rhythm Hounds, played with James Peterson for the better part of a year.

"He kind of took me under his wing and allowed me to be his drummer when the Hounds weren't playing," Scott Peterson says. "I learned more about the blues in that year or so then any other time in my career. And I grew up on the south side of Chicago!"

Peterson's son, who grew up hearing his father and the blues greats who played at his nightclub, is a world-renowned player. A child prodigy who learned under the tutelage of blues giant Willie Dixon and jazz organist Jimmy Smith as well as his father, Peterson led bands for Little Milton and Bobby "Blue" Bland, before establishing his own solo career. His latest release is this year's "You Can Always Turn Around."

James Peterson's funeral will be held at 11 a.m. Saturday at Shady Grove Baptist Church in Eufaula, Ala. He will be buried in the church's cemetery.

— According to Tampa Bay Online