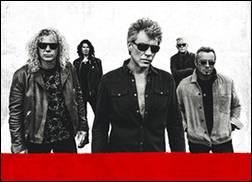 Presented by Live Nation, the This House Is Not for Sale Tour is due to kick off on February 8th at Bon Secours Wellness Arena in Greenville, SC and run through the early spring before concluding at Bankers Life Fieldhouse in Indianapolis on March 22nd.

The tour will feature both fan favorites from the band's catalogue, as well as new material from their upcoming 14th studio album, This House Is Not for Sale (out Nov. 4 on Island/UMG).

The band will do some promo work for the album and tour, including appearances and features on The Ellen DeGeneres Show (airing today), ABC’s Good Morning America, Nightline, Charlie Rose, Howard Stern, People and Billboard Magazine.

This will be the band’s first outing since Bon Jovi’s 2013 Because We Can World Tour, which was their third tour in six years to be ranked the #1 top-grossing tour in the world (a feat accomplished by only The Rolling Stones previously).