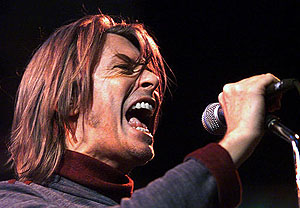 (VIP NEWS) David Bowie is to let thousands of fans see his intimate album launch concert by beaming it into cinemas around the world.

Billed as "the world's first live and interactive music event", the gig will be shown in cinemas from Warsaw to Rio de Janeiro.

And fans are promised the chance to make song requests and ask questions to the star from the cinemas during the 90-minute show.

The gig will take place in London on 8 September, a week before the release of his new album, Reality.

More than 20 cinemas across Europe will receive the show live by satellite.

Due to time differences, audiences in Asia, Japan and Australia will see it the following day.

And in the United States, Canada and South America, it will be screened on 15 September.

Concerts by a number of artists including Beyonce Knowles and Bon Jovi have been beamed into cinemas in the past – but none are thought to have been on this scale.

The show will be filmed in widescreen and surround sound – and beamed to cinemas equipped with digital projectors.

"This is another example of how Bowie constantly pushes the boundaries," his spokesman said.

Bowie is known as a supporter of new technologies, first using e-mail in the 1980s and being among those who pioneered downloads in the 1990s.

Tickets for the UK cinemas go on sale at 0900 BST on Thursday.

His show comes ahead of his first major world tour in almost a decade, which begins in Copenhagen on 7 October.