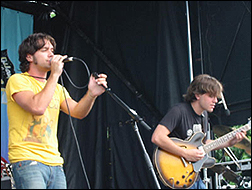 Kevin Carlberg, the lead singer of Pseudopod, underwent surgery on November 19 to remove a malignant brain tumor. Pseudopod was recently on the road in Colorado in support of their self-titled debut CD. While in Ft. Collins, on the eve before starting a tour with the band O.A.R., Kevin became ill with terrible headaches and nausea prior to a radio interview.

Seeking treatment at the local medical clinic, a CAT scan revealed that it was a small tumor that would most likely require surgery. Kevin and the rest of the band immediately returned to Los Angeles for treatment to have the tumor removed. A five-hour operation on Kevin soon followed.

Carlberg is recuperating at home and will most likely need radiation and chemotherapy treatment following the procedure. As a result, Pseudopod has canceled their tour dates with O.A.R. Meanwhile, Carlberg is in good spirits and is determined to make a full recovery.