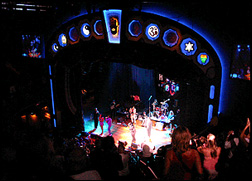 ATLANTIC CITY (CelebrityAccess MediaWire) — One man was arrested and several people injured after a large fight broke out at Thursday's Jim Jones rap concert at the at the Showboat Casino Hotel’s House of Blues.

Police said they received a call at 11:40 p.m. Thursday that there was a large fight at the House of Blues. Officers responded to find several altercations, some involving as many as 30 combatants, with more people watching. The fight spread out through the building and onto the Boardwalk and Pacific Avenue.

About two dozen police cars were seen at the porte cochere of the hotel, and K-9 officers were brought in to assist with crowd control.

“Just about all the units in the city had to respond due to the large number of people involved in the fight,” Detective Lt. William McMenamin said.

Several people were injured, police said, and one man was taken to AtlantiCare Regional Medical Center, city campus, after he was stomped by the crowd. Kevin Philips, 29, of Trenton, was arrested and charged with aggravated assault and disorderly person’s offenses, police said.

The fight may have started inside the concert venue, when someone affiliated with the performers jumped off the stage to film the crowd and got trampled in the process, a House of Blues employee said. Police shut down the venue.

Police said they eventually were able to disperse the crowd.

Michael Grozier, general manager of the House of Blues, said Saturday evening that it was unfortunate there were several incidents involving patrons as they left the venue. He expressed his appreciation for the efforts of security staff and Atlantic City police.

“House of Blues hosts more than 250 performances annually, and the vast majority occur without incident,” Grozier said in a statement. “In the rare situation, as we experienced (Thursday) evening, we have procedures in place to respond quickly to ensure the safety and security of our patrons and our neighbors in the community. Those procedures brought the situation under control quickly. Our security staff reacted effectively to diffuse the situation.”