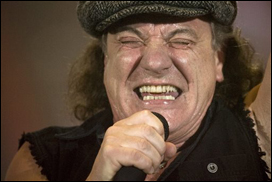 LOS ANGELES (CelebrityAccess) — Despite the tone of finality in AC/DC's announcement regarding the replacement of longtime frontman Brian Johnson, Johnson announced that he is not planning to retire.

Last month, AC/DC announced that they were postponing the remaining ten dates on the U.S. leg of their Rock or Bust world tour after doctors told Johnson that if he continued to tour, he could face total hearing loss. But earlier this week, the group announced they would be resuming their tour with Guns n' Roses Axl Rose filling in for Johnson on lead vocals.

While announcing the news about Rose, the band thanked Johnson and wished him well on “future ventures,” suggesting that his time with AC/DC had come to a conclusion. However, Johnson doesn't seem to see it that way.

In a press release, Johnson said that he is currently undergoing medical treatment for his hearing issues and said he hopes to see enough improvement that he can continue to tour, while emphasizing how important being in the band is to him.

"The emotional experience I feel now is worse than anything I have ever in my life felt before. Being part of AC/DC, making records and performing for the millions of devoted fans this past 36 years has been my life’s work. I cannot imagine going forward without being part of that, but for now I have no choice. The one thing for certain is that I will always be with AC/DC at every show in spirit, if not in person," Johnson wrote.

He also stated that while he cannot currently take an active role in the band's tour, he still intends to record.

"I wish to assure our fans that I am not retiring. My doctors have told me that I can continue to record in studios and I intend to do that. For the moment, my entire focus is to continue medical treatment to improve my hearing. I am hoping that in time my hearing will improve and allow me to return to live concert performances. While the outcome is uncertain, my attitude is optimistic. Only time will tell," Johnson wrote.

Johnson has been a member of AC/DC since 1980, when he successfully auditioned as a replacement for the late Bon Scott following his death by alcohol poisoning. – Staff Writers