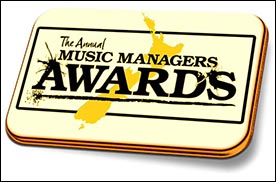 For the second year in a row, Ashley Page took home the 'Recorded Music NZ Manager of the Year' award for his work with the artists Broods, Joel Little, Jarryd James, and Alex Hope. Page's clients, the Broods won four Tuis at the 2015 Vodafone Music Awards and played five US music festivals, while Joel Little was nominated for 3 APRA Silver Scroll Awards.

'Breakthrough Manager of the Year' and the 'NZ Music Commission International Achievement Award' was presented to Alastair Burns who looks after the careers of Marlon Williams and Julia Jacklin.

The prize for 'Self Managed Artist' went to country singer Tami Neilson. Tami was awarded Best Country Album at the 2015 NZ Music Awards.

Teresa Patterson of CRS Management was recognized with the industry champion award, for her extensive involvement with all aspects of the New Zealand music industry for more than 20 years. Her career has included stints as ncluded developing and implementing domestic and international business strategies for recording artists under CRS Management as well as Polygram and Virgin Records. She has also run successful marketing and communications campaigns for artists, tours, and festivals including Big Day Out and Auckland City Limits. Teresa has been the Chairperson of the NZ Music Managers Forum since 2007.

The complete list of 2016 Music Managers Awards Winners are: