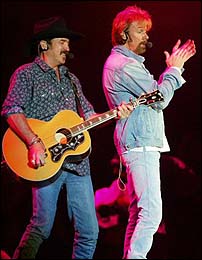 (CelebrityAccess MedaWire) — Brooks & Dunn have been tapped to host the 2004 CMA Awards with a variety of special guests including Shania Twain, after perennial, 12-year CMA Awards host Vince Gill stepped down in January.

"It was going to take someone special to step into this vital, high-profile role," said CMA executive director Ed Benson. "Vince Gill left some big shoes to fill. So, we are thrilled to have two outstanding artists to fill them with Brooks & Dunn. They have the perfect combination of humor, artistic integrity, and the respect of the industry. Not to mention they have been on the receiving end of the CMA Awards for more than a decade. The podium is familiar turf for Ronnie and Kix. We know they will feel right at home and are a perfect fit for the CMA Awards."

"The CMA Awards are a chance to recognize the best music of the past year and to come together as a community," said Kix Brooks. "For us, it's all about honoring our peers, and we are honored to have been asked."

"Who wouldn't want to host Country's biggest night?" added Ronnie Dunn. "To be able to be a part of bringing all these great acts together and then sharing it with Country Music fans across the country, that's pretty awesome. So know, we're ready and looking forward to it."

"After months of careful consideration, the CMA TV Committee and show executives decided that using other artists anchored by Ronnie and Kix during the three-hour, live primetime broadcast would keep the pacing fresh and exciting for the viewers on the biggest night of the year for Country Music," Benson said. "And it will give a larger number of artists access and exposure to a vast network audience leading into the important fourth-quarter record sales season."

Brooks & Dunn have been collecting CMA Awards every year since Gill began his unprecedented, 12-year stint as host of the CMA Awards in 1992. The duo were nominated for the Horizon Award and Album of the Year Award for their sextuple Platinum debut Brand New Man, in addition to winning their first of 11 Duo of the Year Awards. Consistently recognized for Single, Song, Album and Video of the Year, the 27-million selling pair also won the prestigious CMA Entertainer of the Year in 1996.

"They have the talent, longevity and humor to pull off a job that is a lot harder than it looks," said Robert Deaton, who chairs CMA's TV Committee. "These guys are consummate entertainers, but at the heart of what they do is a respect for the Awards and the entire artist community."

The CMA Awards are produced by Walter C. Miller, directed by Paul Miller and scripted by David Wild. MJI Programming, a division of Premiere Radio Networks, is the official radio packager of the CMA Awards, which includes Red Carpet coverage and a stereo-radio simulcast of the gala event.–Bob Grossweiner and Jane Cohen