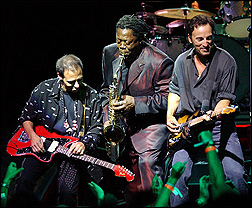 Bruce Springsteen continues his European success with record-setting sellouts of stadium shows scheduled for Next spring in the Netherlands, Finland, Norway and Sweden.

His ticket sales for his 2003 stadium concerts in Germany and Austria, are also near sellouts, with additional dates to be announced in November.

Following the recent success of Bruce Springsteen and the E Street Band's October whirlwind tour through Europe, tickets went on sale this week for new stadium shows in the Spring of 2003 in Rotterdam, Netherlands (May 6 and 8); Ludwigshafen, Germany (May 10); Gelsenkirchen, Germany (May 22); Helsinki, Finland (June 17); Oslo, Norway (June 19); Gothenburg, Sweden (June 21 and 22); and Vienna, Austria (June 25). One Rotterdam show sold out in 40 minutes and a second show is selling quickly, while the Oslo, Helsinki and two Gothenburg concerts all sold out in a record two hours. The German and Austrian dates are also nearly sold out. In fact, Bruce Springsteen and the E Street band have already sold approximately 400,000 tickets for their Spring 2003 European Tour, and most of those were sold in a single day.

Springsteen plans to announce approximately 13 additional 2003 European dates later this month. The announcements will be made locally in each city.

Long-time manager Jon Landau, told CelebrityAccess, that Europeans' excitement about Springsteen and the Band stems from several factors. "Fans in Europe have really embraced [Bruce's new CD] 'The Rising,'" he said, adding, "The overwhelming interest in the Band's show has also been enlarged by MTV Europe's spectacular live broadcast of their October 16 concert in Barcelona."

That broadcast, entitled 'A Night With Bruce Springsteen and the E Street Band,' aired on MTV Europe and VH-1 UK in more than 127 million homes across the continent. Critical reaction to this concert, as well as the recent shows in Paris, Bologna, Berlin, Rotterdam, Stockholm and London that took place in October, has been sensational, further fanning the European flames:

Spanish newspaper El Pais wrote, "The Boss made the walls of the Palau St. Jordi tremble."

The UK's Evening Standard wrote, "Exhibiting expertise in every rock and roll move in the book, he swung from his microphone stand, danced on the piano and slid across the stage on his knees… exhilarating."

"Is there any sound in popular music that is more exhilarating, more joyful, more uplifting, more life-affirming than that of Bruce Springsteen and the E Street Band in full flight?" asked the UK's Daily Telegraph.

The Guardian wrote, "It is Springsteen's non-stop action that generates the kinetic energy at the heart of the performance. Skidding across the stage on his knees, he burns with a million megawatts of energy."