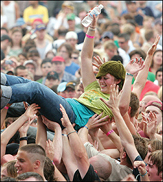 VINELAND, NJ (CelebrityAccess MediaWire) — The town of Vineland NJ will play host to a new three-day rock festival staged by a team-up of C3 Presents, the creative team behind Lollapalooza and Austin City Limits and Festival Republic, the organizers behind the UK's highly-successful Leeds, Reading and Glastobury Fests.

According to the Courier-Post, the festival will be styled on the Reading Festival, an event known for its diverse and entertaining lineups.

Presently, the event is slated for August 8-10 in Vineland, a small town about 60 mile miles south of Philadelphia. A 570-acre farm there has reportedly been leased for 3 years by Festival Republic. Although no lineup has been announced, promoters have stated that the event will should have on-site camping and a 3-day pass will run you $225

Festival Republic's Melvin Benn told the Courier-Post, "I'm looking to build a great festival. I want the quality of the bill to have great integrity, to build on my reputation as a promoter in the U.K. and on my partners' reputations in the U.S."

"Vineland will be rock-oriented but the music will be extremely diversified, with hopes of drawing all different types of people," C3 partner Charlie Jones told the Chicago Trib.

Perry Barse, the mayor of Vineland was joined by Benn at the Vineland city hall to announce the festival. Barse, according to local paper The Daily Journal, extoled the virtues of said fest, stating that "The festival will bring international name recognition to Vineland, as well as hundreds of thousands of dollars in revenue to local businesses." Many residents aren't as sanguine however. A bulletin board hosted by a local paper has hosted a particularly frank and engaged discussion on the pros and cons of the event and many have voiced concerns about the strain on infrastrucutre and traffic problems.

More on this story as it develops. – CelebrityAccess Staff Writers