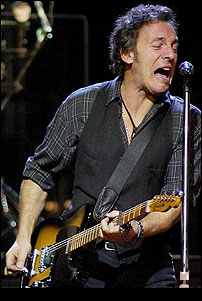 CBS-TV will air an hour-long Bruce Springsteen concert special February 28 (9:00-10:00 PM, ET/PT). The concert footage is from a Barcelona show last year which VH1 aired live portions of in certain European markets. According to the New York Daily News, a CBS executive said little of that broadcast will be a part of the CBS show and there will be limited ad breaks.

The concert special features "The Rising," "Lonesome Day," and "You're Missing" from The Rising, in addition to "Darkness on the Edge of Town" and others.

Jon Landau and Barbara Carr are executive producers of the special. The show was produced by George Travis, directed by Chris Hilson and edited by Thom Zimny. All music was recorded and mixed by Brendan O'Brien.