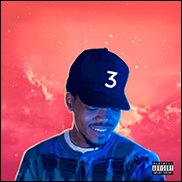 (Hypebot) – After weeks of questions from insistent fans, Chance The Rapper shared that Apple Music had paid $500,000 last year for a two week exclusive on his then highly anticipated "Coloring Book" album.

In a series of tweets Friday afternoon, Chance The Rapper shared that Apple Music has paid half a million dollars for a 2 week exclusive debut of his "Coloring Book album in May of last year.

"I wanna clear things up. @apple gave me half a mil and a commercial to post Coloring Book exclusively on applemusic for 2 weeks," Chance tweeted on Friday.

"That was the extent of my deal, after 2 weeks it was on SoundCloud for free. I needed the money and they're all good people over there," he continued on Twitter. "I just wanna remain transparent, folks out there without a deal need to know they're doing everything right just keep at it… I think (an) artist can gain a lot from the streaming wars as long as they remain in control of their own product."

In its first week on Apple Music, "Coloring Book" earned 38,000 equivalent album units from a total of 57.3 million streams. The album debuted at No. 8 on Billboard's 200 chart – the first streaming-only album to ever chart there. Six months later, Apple Music passed 20 million paid subscribers a year and a half after launching.

Was the deal worth it for Apple?

It may be impossible to know. Chance The Rapper is unique – a hugely popular indie artist whose music is only available via streaming. But he certainly set the bar high. In fact, its hard not to imagine other artists not wanting to collect a half million for a two week window.

And compare $500,000 in cash to some stock in Tidal and Chance looks even smarter.