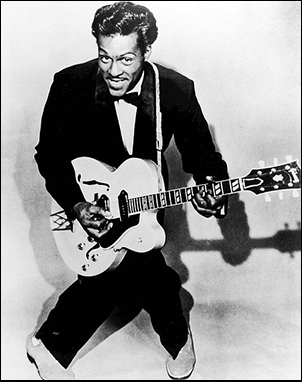 LADUE, Missouri (CelebrityAccess) — Chuck Berry, a guitarist, singer and songwriter who was one of the progenitors of rock n' roll, has died. He was 90.

With hits like "Maybellene," "Rock and Roll Music," and "Johnny B. Goode" Berry played a key role in helping to refine rhythm and blues into the new sound that would become rock n' roll.

Berry's death was confirmed by the St. Charles County (Missouri) Police Department via their social media after they were summoned to Berry's home where the found him unresponsive, according to ABC News.

Hailing from St. Louis, Missouri, Berry started his musical career as a high school student, playing blues music around the Chicago blues scene until he landed a recording session with Chess Records. Label head Leonard Chess proved to be less interested in his blues, but picked up on Berry's rendition of a Bob Wills hit "Ida Red" which became "Maybellene," with the resultant single selling more than million copies and hitting #1 on the Billboard charts.

"Maybellene" would mark the start of a period of success for Berry and he followed it up with a string of top ten hits including "School Days," "Rock and Roll Music," "Sweet Little Sixteen," and "Johnny B. Goode."

However, Berry couldn't manage to avoid legal entanglements. He'd already been sentenced to a reformatory while still in high school after he was convicted of a series of armed robberies. In 1959, his career was interrupted with a second stint in prison after he was charged with violating the Mann Act for engaging in sexual intercourse with a 14-year-old girl. Berry successfully appealed his initial conviction, claiming the judge had demonstrated prejudice during the trial, but was convicted again during a second trial in 1961 and sentenced to three years in prison.

While he continued to record and perform during the trials, they contributed to his waning popularity as the public turned to the sound of the British invasion.

Berry continued to record and tour through the late 1960s and 1970s but did not manage to score another hit until 1972 when he covered "My Ding-a-Ling" which peaked at #1 on the Billboard Hot 100 chart. However, his live performances became increasingly slipshod during this period and he gained a reputation for performing out-of-tune and sloppy performances.

A young Bruce Springsteen, performing in Berry's backup band at the time, later described the experience in the documentary film Hail! Hail! Rock 'n' Roll, stating that Berry didn't even provide his musicians with a set list and expected them to follow his lead.

In 1979, Berry had his third run-in with the law when he was sentenced to prison on tax evasion charges dating to 1973. Berry, who was then performing on the oldies circuit where local promoters often paid with cash, was charged with not reporting approximately $110,000. He was sentenced to four months in prison and 1,000 hours of community service, mostly in the form of benefit concerts.

Berry continued to tour in the 1980s and 1990s, playing 80-100 shows a year, and was the subject of the documentary Hail! Hail! Rock 'n' Roll, which captured a concert he performed on his sixtieth birthday.

In 1990, Berry was sued after several women alleged that Berry had surreptiously recorded them in the bathroom of The Southern Air, a restaurant in Wentzville, Missouri that Berry owned. Berry settled the case via a class action, but he was later arrested after police discovered a small amount of marijuana as well as videotapes of women – one of whom was reportedly a minor – using the restroom at his restaurant. According to Rolling Stone, Berry agreed to plead guilty to one misdemeanor count of marijuana possession to avoid child abuse charges and was given a six-month suspended jail sentence, placed on two years’ unsupervised probation.

Late last year, Berry announced that he was recording again and planned to release new material in 2017. He hinted that the album 'Chuck' would be his last and recorded it with the 'Blueberry band' that included his children Charles Berry Jr. and Ingrid.

Berry was one of the first artists to be inducted into the Rock & Roll Hall of Fame when it opened in 1986. – Staff Writers