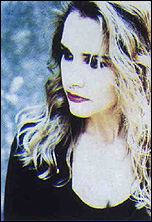 Charlotte Caffey of the "The Go-Go's" and record label partner Anna Waronker are writing the music for the upcoming rock production, "Lovelace: The Musical," based on the life and career of adult film actress Linda Lovelace, star of "Deep Throat." Caffey wrote several hit songs for The Go-Go's including "We Got The Beat" and in 2002 wrote the Number One country hit, "But For The Grace Of God," for singer Keith Urban. Waronker is daughter of Dreamworks Records president Lenny Waronker. Her band "That Dog" produced three albums on DGC/Geffen Records. Her current release is "Anna By Anna Waronker."

The book and lyrics for "Lovelace: The Musical" were created by Jeffery Bowman, author of nine produced plays, including 1995's "Inaccurate Information" at The Hudson Theater. He is also the author of "Diva: The Unauthorized Biography Of Whitney Houston" published by HarperCollins.

Jane Wiedlin of The Go-Go's is a creative consultant with the project.

Former "Family Ties" child TV star Tina Yothers will portray Linda Lovelace in a showcase presentation of the musical to be presented on June 20-22 and 27 at Theatre Of NOTE at 1517 Cahuenga Blvd, Hollywood, CA. Yothers is well known on the L.A. club circuit as a musician and singer.

"I was first attracted to the human interest side of Linda's story and then fell in love with the idea of it being a musical, adds Caffey. "Most people know Linda as just 'the Deep Throat' girl; but through songs ranging from delicate ballads to big production numbers, we are telling a bigger story of this woman's life."

The June showcase will feature eight songs and scenes from the full production, with plans for a fall 2003 Off-Broadway opening at The Revelation Theater in New York.