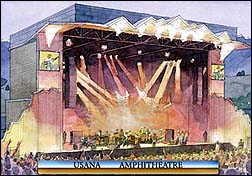 The USANA Amphitheater, owned by United Concerts as part of a partnership with New York-based Quincunx, a subsidiary of Q Prime artist management, is scheduled to open in West Valley City this July.

"I think the site we have chosen will truly highlight the features" of the valley, McKay said. "People truly like to be outdoors in the summer."

Buffalo-based M&T Bank will pay the 2001 Super Bowl winners, the Baltimore Ravens, $75 million over 15 years, for the naming right on Ravens Stadium, which has now been renamed M&T Bank Stadium.

"There is no better way to utilize our marketing dollars to achieve cost-effective, high-impact recognition in a new marketplace," M&T Bank President Robert Sadler said, reports the Baltimore Business Journal.

According the Dean Bonham, president of the Denver-based Bonham Group sports marketing company, the deal falls within the range of most naming-rights agreements, which
run between $2 million to $7 million a year for 20 to 30 years.

The M&T name will be on the inside and outside of the 68,915-capacity stadium as well as in a broad range of corporate identity signs, in-stadium M&T Bank ATMs, highway signs, promotional events and the team's renamed M&T Bank Marching Ravens.

M&T Bank Stadium was built in 1998 and cost $220 million. For the next four years it was known as PSINet Stadium, after the Internet service provider bought the naming rights. However, PSINet went bankrupt in 2002.

Sin-e, the East Village club that an unknown Jeff Buckley liked to call home, has reopened after five years at 150 Attorney Street (at Stanton Street) on the Lower East Side of New York City and caters to mostly local talent.

Whereas the former St. Mark's Place coffeehouse was free to the public, the new 225-person capacity coffeehouse club charges a cover, generally $6-$7-$8, sometimes as high as $12. Sinead O'Connor once appeared at the old club for a few nights, easily the biggest attraction the Shayne Doyle club ever booked. Sin-e is booked by Bill Bronson at 212-388-0079.