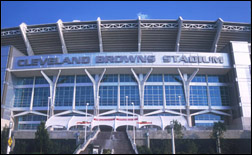 CLEVELAND (CelebrityAccess MediaWire) — A country music concert by Kenny Chesney on July 14th at the Cleveland Browns Stadium was hindered by plumbing problems.

According to a report in the Cleveland Plain Dealer, a water main broke at the stadium, causing the toilets to cease functioning. To make matters worse, water and other "unspecified" material began to pour from the ceilings onto concert-goers and down the stadium's aisles and walkways.

The fans were undeterred however and according to the Plain Dealer, few left the concert early because of the septic issues.

Stadium officials have stated that the problematic pipe was underground and that repairs would require several days and a "Ticket Tailgate and Family Night" scheduled on July 16th for Browns fans was canceled because of the leak. – CelebrityAccess Staff Writers