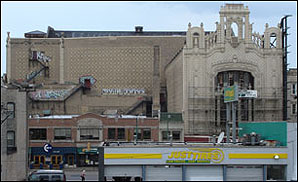 CHICAGO (CelebrityAccess MediaWire) — Chicago's Uptown Theatre may be in play again, if a city official has anything to say about it.

The Chicago Sun-Times is reporting that Alderwoman Mary Ann Smith is working to broker a deal to find a new operator for the city's Uptown Theatre, which is currently owned by Jam Productions. According to Smith, Jam has been a "poor steward" for the Uptown and that Live Nation would be a logical choice to take over operations at the theatre. Concordantly, she has been urging both parties to consider a sale or an partnership for the venue between Jam and Live Nation.

Live Nation would be an interesting choice in partners for Jam Productions. The two companies are competitors and Jam won a $90 million court case against Clear Channel, Live Nation's former parent company, in 2006 over charges of unfair competition. Live Nation potential interest in the Uptown has been evidenced by the promoter retaining Gery Chico, a Chicago attorney, to advise them on the matter the Sun-Times said.

"There's a chance" it will happen, Smith told the Sun-Times "They're all talking to each other."

Mickelson has a different take on the partnership situation and while he has said that he is open to proposals that there were no active talks ongoing between Jam and Live Nation, the Sun-Times said.

Jam Productions acquired the Uptown last summer when they and a partner put up $3.2 million to acquire the theatre in a foreclosure auction. Since then however, the promoter has been in a legal battle with the city over a $5 million reserve that the city has requested to cover repairs at the venue. The city is also seeking $1.7 million to cover liens placed on the property against emergency repairs.

Jam's co-founder Jerry Mickelson has been seeking financial assistance from the city in bringing the classic theatre back to life – possibly an investment of as much as $40 million, the Sun-Times reported. The theatre, an art-deco palace from the 1920s, has a number of challenges to overcome in order to be viable as a live venue. Apart from the aforementioned financial issues, the theatre needs a major rehab. With a capacity of 4,300, its too large for theatre shows and too small for major tours.

Mickelson has said that the theatre's auditorium would be viable with a redesign, using terraces and open spaces. Smith is critical of this plan, stating "Mickelson wants to rip everything out and do a mosh pit."

Smith and Mickelson have a contentious history with each other. Smith's ward includes The Uptown and she and Mickelson have sparred over the property in the past. Smith claims that in the 1990s, Mickelson worked to scuttle a deal she conceived with Little Caesar's Pizza chain founder Mike Ilitch to take the theatre over. – CelebrityAccess Staff Writers