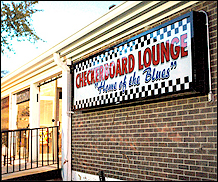 The Checkerboard Lounge for Blues ‘n’ Jazz opened last week in Chicago’s Hyde Park in a mall near the University of Chicago. The new digs feature neon signs that light up the room, a sleek bar, and a sepia photo of Muddy Waters peering down at the stage.

The new club is owned by L.C. Thurman, who had partnered with blues legends Buddy Guy and Junior Wells on the previous version of the club, and his pride is hard to conceal.

“I feel good – I feel great,” he told the Chicago Tribune.

“It’s a little bigger than the old place, holds maybe 30 people more,” he added. The room holds a capacity of 145.

“But it’s been too long a wait to get here. I’m glad the moment has arrived.”


After the original Checkerboard closed in 2003 due to various city violations, the Committee to Restore Jazz in Hyde Park invited him to check out the area. Committee Chairman James Wagner put Thurman in touch with representatives of the University of Chicago, which owns the building, and the deal started coming together immediately, according to the paper.

Dolores Scott, who also handled booking duties for the original club, will book the new venue. Scott can be reached at 773-710-5363. The club can be contacted at 773-684-1472. –by CelebrityAccess Staff Writers