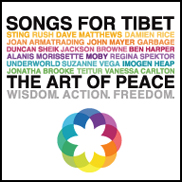 BEIJING, China (Hypebot) – China has blocked internet users from accessing the iTunes Music Store after a group of atheletes downloaded the Songs For Tibet protest compilation while housed in the Olympic Village near Bejiing.

The Art Of Peace Foundation, who produced the album, encouraged the atheletes to download the album to show how "compassion and non-violence can overcome intolerance and oppression – beautiful ideals to be associated with the Olympic spirit". More than 40 athletes downloaded the album which includes songs by Sting, Rush, Damien Rice, Dave Mathews, Alanis Morissette and others.

Apple has just opened its first Chinese retail store and Steve Jobs, who is a practicing Buddhist, is negotiating with mobile companies to brin the iPhone to the country. Officially sponsored China.org.cn claims that…the album "ignited strong indignation among Chinese netizens" that are "rallying together to denounce Apple in offering "Songs for Tibet" for purchase. They have also expressed a wish to ban the album's singers and producers, most notably Sting, John Mayer and Dave Matthews, from entering China. Many people have made remarks on online forums to express their anger, even those who have been fans of the artists in the past."

"Some say they will boycott all Apple products from now on, including the popular iPhone, which is not available in China since negotiations among Apple, China Mobile and China Unicom broke down," the site reported.