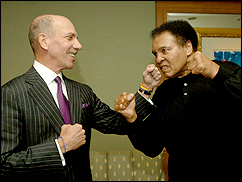 The moves mark the initial rollout of CKX's overall strategy for the company, formerly known as G.O.A.T. LLC., an acronym for "Greatest Of All Time," the name by which Ali is recognized globally. However, G.O.A.T. will continue to be used by the company in connection with certain products, like his new line of nutritious snack foods that candymaker Mars is developing, and that will be sold under the GOAT Food & Beverage brand.

In April, CKX purchased an 80 percent interest in the name and likeness Ali. The remaining 20 percent was retained by The Muhammad Ali Family Trust. Ali and his wife, Lonnie Ali, are the trustees of the trust.

"We feel the new name makes clear that this company is all about Muhammad Ali and his principles," said Robert F.X. Sillerman, chairman and CEO of CKX. "Given the worldwide recognition of Muhammad Ali and his ideals, it made perfect sense to put his name on the marquee, so to speak."

In the appointment of DiNicola, CKX has added one of Ali's closest and most trusted advisors. DiNicola has been the attorney for Ali for nearly 20 years, overseeing everything from book, movie and licensing deals to the securing of intellectual property rights.

"Other than Muhammad and his wife, Lonnie, there is probably no one who appreciates the integrity of the Ali name more than DiNicola," Sillerman said. "Ron brings extraordinary talent and creativity to this growing company and has a great understanding of all Muhammad Ali stands for and represents to people all over the world."

"With all that CKX brings to the table, it is clear that there is more to Muhammad Ali Enterprises than licensing deals," Sillerman continued. "We are actively pursuing strategic opportunities that represent the ideas and ideals of Muhammad, both nationally and internationally. And in keeping with the business plan of CKX, we are also seeking to secure content and intellectual property related to Muhammad that could be delivered around the globe in a multitude of platforms."

The GOAT brand of nutritious foods, being developed with Peter Arnell and MasterFoods' MARS Nutrition for Health & Well-Being division, is an example of the type of opportunity Muhammad Ali Enterprises will pursue. The brand epitomizes Ali's belief in having a fit and healthy lifestyle and his desire to help the world's youth improve their bodies as well as their minds. The first GOAT food products to be developed, packaged snacks containing no more than 150 calories and fortified with vitamins and fiber, are expected to be available in stores early next year.

DiNicola will leave his position as a partner at Mitchell Silberberg & Knupp LLC, a California law firm. He has been with the firm since 1984, specializing in entertainment, sports and intellectual property law.
–Bob Grossweienr and Jane Cohen