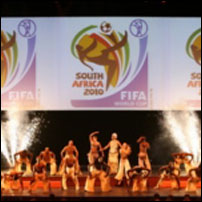 BERLIN, GERMANY (CelebrityAccess MediaWire) — A cloudburst forced the cancellation of a concert here to kickstart the four-year journey to the 2010 World Cup in South Africa.

Torrential rain and strong winds swept across the outdoor venue in front of the landmark Brandenburg Gate Friday just over an hour before the first artists were due to take the stage at 7 p.m. (1700 GMT).

The area was ankle-deep in water. Officials said they feared for the safety of both spectators and the performers and had no alternative but to cancel the event.

The storm also forced the temporary evacuation of the media centre at the Olympic Stadium, while a rehearsal for the closing ceremony at Sunday's World Cup final had to be called off.

Some 16 litres of rain per square metre fell on the centre of the capital in the space of a few minutes. 'The water inundated the technical equipment,' said Alex Koch, a spokesman for FIFA, football's governing body.

The concert had been described as 'the biggest single football party ever', two days before the final between Italy and France at the Olympic stadium.

The 'Football for a Better World – From Germany to South Africa' show was due to have been shown live in 120 countries.

Among the showbiz artists who were to perform were Brazil's Ivete Sangalo, hip-hop superstars Sean Paul, Wyclef Jean and Lumidee as well as the famous African artist Youssou N'Dour.