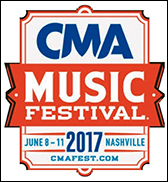 NASHVILLE, TN (CelebrityAccess) — After decades of dominance, the Country Music Association's long-running CMA Fest is starting to feel the effects of competition in an increasingly busy U.S. festival market.

The CMA festival, which was founded in 1972, will take place from June 8 – June 11 in Nashville, and will be squaring off against the second annual Carolina Fest, which takes place in Myrtle Beach, S.C., on the same weekend as does The Taste of Country Festival in at New York state's Hunter Mountain Resort. Both of the newcomer fests were launched weekends where they didn't compete directly with CMA Fest, they have recently shifted their schedules to share the same weekend.

Here's the kicker though. CMA Fest is intended to promote country music and as a result doesn't compensate artists who perform at the event, leaving them on the hook for their bands and expenses, whereas Taste of Country and Carolina Fest are both pay to play.

Billboard reported that as a result, many country artists are making the stretch to play at multiple events that weekend. Artists booked to both CMA Fest and at least one of the other events include Tim McGraw, Florida Georgia Line, Miranda Lambert, Sam Hunt, Darius Rucker, Maren Morris, Chris Lane and Brett Young. Chris Young has signed on to perform at all three events, June 9th for Taste of Country, June 10 at CMA Fest and June 11 at Carolina Fest.

"I think they are happy that they have a chance to get a paycheck during a week that they normally don't tour," Carolina Fest Producers Full House Productions president Bob Durkin told Billboard. "It's a primetime summer weekend, and that's when country music seems to flourish."